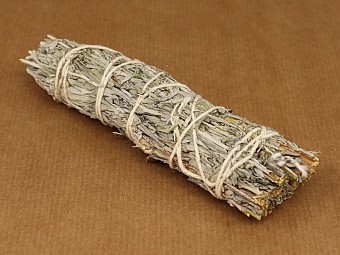 Blue Sage, which is named for its abundant blue flowers, is a hardy bush wild harvested in the North American Southwest deserts. It has been used by the Native American tribes in this area for hundreds of years and is a close relative to the White Sage. Similar in its uses for purification, spiritual healing and protection; but with a milder and less pungent scent, that's soothing, relaxing and a great aid in meditation and prayers.

Blue Sage smudge stick. Blue Sage also known as "Grandmother Sage” is a purifying herb. It is a close relative of White Sage. This smudge stick is an extraordinary tool for the shaman and spiritual healer to burn and smudge incense resins without the need for a charcoal. The smudge stick is used and works as a Palo Santo stick or White Sage smudge stick. Light the end of the stick, extinguish the flame and let the stick smoulder. As a Palo Santo stick, the smudge stick extinguishes its self after a while, and can be reignited if more fragrance is needed. It can be used as a preparation to meditations, sacrificial smoke to deities or smudging of people, places and objects. Ideal to carry and use when negative and undesirable energies are found within oneself or ones surroundings.

Salvi azurea is a clump-forming, shrubby perennial with beautiful ends of sky blue flowers, up to 30cm long. Blooming from midsummer till the frost comes. The elegant flowering wands are borne on slender stems clad with long, narrow, greyish-green leaves. Hardy, this Salvia features an upright habit until midsummer, but will sprawl over nearby plants when it begins to bloom. Spectacular in the garden in the autumn. This plant is native to Southern United States.