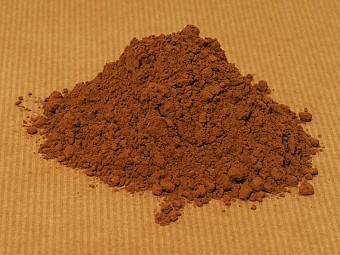 Chocolate is a psychoactive food. For some people, the lure of chocolate can be overwhelming. Cocoa contains certain chemicals and sensory properties that make the product very appealing. Cocoa contains theobromine (a chemical related to caffeine). The sugar in chocolate releases serotonin (a brain chemical related to a positive sense of well-being). The smooth, rich taste of chocolate provides sensory pleasure to the taste buds. More information below.

Allergen Statement: We hereby certify that Cacao powder we sell does not contain any substances causing allergies or intolerances as ingredients or by possibility of cross contamination. The list of allergens which are likely to cause adverse reactions in susceptible individuals is provided in Annex IIIa of Directive 2007/68/EC. Please note that this statement is based on the information provided by the manufacturer of the product.

Organic Cacao Powder is certified organic by the Soil Association under the code GB-ORG-05.

Although addictive behavior is generally associated with drug and alcohol abuse or compulsive sexual activity, Chocolate may evoke similar psychopharmacologic and behavioral reactions in susceptible persons.