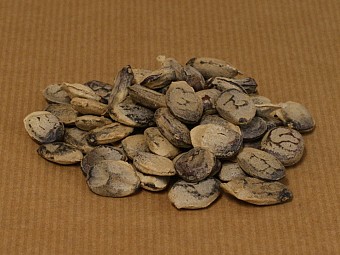 Emburana (Amburana cearensis). This is an often used ingredient in Rapé preparations. To prepare the tea, use the bark and/or the seeds of the Emburana in the proportion of two tablespoons for each litre of water. More information can be found below.

To prepare the tea, use the bark and the seeds of the Emburana in the proportion of two tablespoons for each litre of water. Put the eggshells, seeds and water in a container and bring to the fire. When reaching boil, let cook for about ten minutes and then remove from the heat. Cover and let the mixture stand for approximately ten minutes. After that time, cool it and consume without sweetening. The indicated dose is two to three cups of the daily tea of Emburana.

With the scientific name of Amburama cearensis, the plant Emburana is native of Brazil. It is a medium tree, capable of reaching up to 10 m in height. Its bark has a reddish-brown tone that stands out between thin blades. A fundamental point to recognise the Emburana tree are its whitish, extremely aromatic, tiny flowers, which form clusters that completely cover the leafless branches. The more remote times refer to Emburana as an efficient dressing flavouring, however, over time it was discovered that the plant had many other benefits.

Emburana is a tree that can reach up to 10 meters in height. Coated with a reddish-brown bark, its flowers are white, small and of strong aroma that completely cover its branches without the leaves due to the flowering. Also known as Amburana, cherry-gust, conduru, cumbaru, cumaré and cumaru-de-cheiro (Scented Cumaru), Emburana has seeds contained in flat black pods that are winged, flattened, wrinkled and have a pleasant smell.