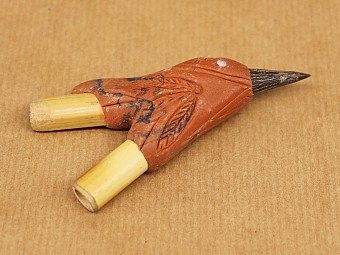 Wonderfully handcrafted Kuripe, made from bamboo and epoxy resin, decorated with the head of a bird. The beak of the bird is made of the sharp end of a large seed from the Amazon. A marble effect is created by combining various colours of epoxy. These artworks are made by our friend Ruddison Vale, a respected artist and Rapé producer from the Kuntanawa tribe, living in the state of Acre, Brazil.

Kuripe (self-applicator) made with Bamboo and resin, various birds, decorated with beads or semi precious stones. These wonderful kuripe are produced by a friend of our Rapé producer in Acre, Brazil. Kuripe are used to administer herbal snuffs and powders such as Nu-nu, Rapé and Tobacco snuffs.

Traditionally, Nu-nu, Rapé and Tobacco snuffs are applied by using a pipe made from bamboo or bone, which is blown through each nostril, on both sides. They can be self-administered using a V-shaped self-applicator pipe, which connects the mouth to the nostrils. Alternatively, the can be administered by another person using a blow pipe, which connects the blower’s mouth to the other person’s nostrils. The self-applicator pipe is known as ‘Kuripe’, and the blow pipe is know as a ‘Tepi’ in the Brazilian tradition. General suggestion is to use a pea sized amount (50% for each nostril) of medicine for beginners, and dosage can be increased after prolonged use of a specific Rapé. Also, it is suggested that you use them within a quiet sacred space without any interruptions – sitting upright, either cross-legged or in a chair with eyes closed after application. Also, suggested slow breathing after application through the mouth/nose is very important.