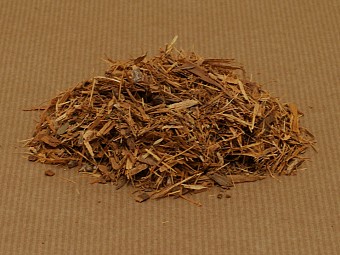 Prices below have been reduced by 5% for a limited time.

Catuaba is a generic term for bark from different trees such as Trichilia catigua, Erythroxylum catuaba, Erythroxylum raccinfolium, Anemopaegna arvense, Phyllanthus nobilis etc. The actual species we offer might vary from one batch to another. These Brazilian trees are used interchangeably by indigenous people like the Tupi, preparing it as a tea.

Few beneficial plants are as popular or as widely consumed among the natives of the northern Amazon river basin as the barks of Catuaba and Muira Puama (Ptychopetalum olacoides). These two common trees grow widely from Peru to Brazil.

Ecstacy users who are weary of the up/down treadmill and concerned about long-term damage may also find Catuaba an interesting and safer substitute. The effects are milder but are, if anything, rather more agreeable and certainly less violent. Reportedly, there is no deleterious hangover.

Erythroxylaceae (Coca family). Native to Brazil, catuaba is a medium-sized, vigorous growing, leafy tree with a thick knotty trunk. The root system is mostly above ground and each root measures from 2 to 2.5 meters. It produces pretty yellow and orange flowers, and small, oval, dark yellow inedible fruit. It can be found in the Amazon, Para, Pernambuco, Bahia, Maranhao, and Alagoas.

Catuaba is often used in combination with Muira Puama (Ptychopetalum olacoides) as an aphrodisiac.