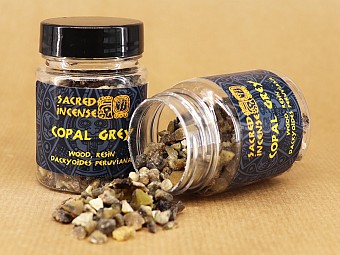 Cut and sifted grains of mineral Copal resin, also called Copal Grey. A cleansing and refreshing scent, Copal can be used to purify the energy of spaces, places and objects. Copal is a generic term used for tree resin that is neither in gel/gum form nor amber form. Copal is a tree resin that is in between these two states, hard, honey in color and can come from any tree, as it is a term used for the hardened resin, it is not the name of a resin from a particular tree. Copal is still used by a number of indigenous peoples of Mexico and Central America as an incense and during sweat lodge ceremonies.

Copal is a generic term used for tree resin that is neither in gel/gum form nor amber form. Copal is a tree resin that in between these two states, hard, honey in color and can come from any tree, as it is term used for the hardened resin, it is not the name of a resin from a particular tree. The term is derived from the Aztec Nahuatil word ‘Copalli’. The Mayan term for Copal is ‘Pom’ which translates to incense, not resin.  In the south states of Mexico, Mayan communities use trees from the Burseraceae (Copal family), a flowering shrub or tree that is linked to the Torchwood or Elephant Tree that is found in the area. The Buresa family has over 100 different species of trees that provide resin to the Mayas in southern Mexico. The tree is said to be a medicinal tree that is used traditionally for clearing the body of diseases, used to ward off mosquitos and can be also be used as a glue. In the Mayan ruins in the southern part of Mexico, Copal from the Buresa family of trees has been discovered in burial grounds which proves the spiritual uses of this tree resin.[1]  Copal is still used by a number of indigenous peoples of Mexico and Central America as an incense and during sweat lodge ceremonies.[2]

Sacred Incenses. We offer a unique collection of the rarest plants that are used as an incense for ceremonial purposes or healing. A carefully selected range of the finest incense herbs, woods, resins and incense mixtures from around the world.

Our packaging is small, and the textures of our incenses and blends are very fine. They come in the form of powder, fine grained cut and sifted grains of leaves, flowers, wood or resin. This fine-ness allows for precise blending of your personal mixtures, and allows for subtle application in a small and dedicated setting. This collection offers a great palette of fragrances to create a beautiful setting for an inner journey or ceremony.

There are many uses for Copal that are documented in anthropology journals, but in Tulum, Copal is still used for three very distinct and significant purposes: natural mosquito repellant, cleansing of ill persons and spirits, natural glue for leather, ceramics and natural woods.  The Bursera family of trees have specific medicinal advantages that clear the body and the environment of unwanted mosquitos, ailments and for some unwanted spirits. The burning of the Copal resin as an incense or resin rock in a wood fire will help the cleansing of all of the above. The Mayas would use copal to clean the spirit of dead animals prior to eating, cleanse public spaces to ensure all spirits are driven from the area, and use Copal to ward off mosquitos. This natural cleansing agent is used in contemporary Tulum as a natural agent to help with mosquitos, ailments and more. It is a great sustainable mosquito repellant that is not toxic and does not damage the environment, the indigenous plants or people.[1]

Tuevetli is a tree known to the Aztecs but remaining a mystery to contemporary botanists. We know that a tree by this name was incised to release its resins so that they might be used in ritual sacrifice. Slaves and captives had to climb to very high altars on these occasions and force was not appropriate to sacrificial ritual. It was necessary to induce a trance state that would not impair motor coordination and cause them to fall. We know little of this narcosis except that given this control of muscle combined with passive behavior it was most likely a hypnotic.

Bursera species were used in diverse medical practices among the Aztecs. All of these have resin canals running through the bark and when slashed, a gummy resin is exuded. Leaves frequently spray a mist of volatile oils when broken. These gums and oils were applied directly to induced wounds before the ceremony so that a direct connection with the circulatory system of the blood might be established. In spite of this extraordinary story, Copal actually has a beautiful fragrance and is nowadays commonly used as an ingredient for producing incense.

In contemporary Mexico it is also used as a tool for ceremonies and rituals, and some species of Bursera are used to allay pain in instances of toothache.

Copal was also found in East Africa (the common species there being Hymenaea verrucosa), initially feeding an Indian Ocean demand for incense. By the 18th Century, Europeans found it to be a valuable ingredient in making a good wood varnish. It became widely used in the manufacture of furniture and carriages. It was also sometimes used as a picture varnish. By the late 19th and early 20th century varnish manufacturers in England and America were using it on train carriages, greatly swelling its demand.

In 1859 Americans consumed 68 percent of the East African trade, which was controlled through the Sultan of Zanzibar, with Germany receiving 24 percent. The American Civil War and the creation of the Suez Canal led to Germany, India and Hong Kong taking the majority by the end of that century. East Africa apparently had a higher amount of subfossil Copal, which is found one or two meters below living Copal trees from roots of trees that may have lived thousands of years earlier. This subfossil Copal produces a harder varnish. Subfossil Copal is also well-known from New Zealand (Kauri gum), Japan, the Dominican Republic, Colombia and Madagascar. It often has inclusions and is sometimes sold as "young amber".[2]

Copal is from the Burseraceae (Copal family).

Copal has a distinct smell and aroma that will link you back to Tulum or other Central America locations that still use Copal as a natural cleansing agent. Unlike other incense, Copal is not as invasive as a smell and can be burned in a home without the lingering smells experienced by other tree resins like Frankincense (Boswelia carteri) and Myrrh (Commiphora myrrha).

[1] Mayan Monday, The secret to Copal and the many uses of this tree resin, Casadelasolas.com
[2] Copal, Wikipedia