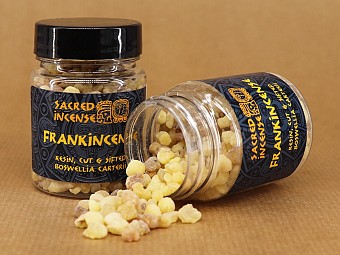 Clear and fine, resinous, refreshing light Boswellia sacra resin granules, cut & sifted, wild-harvested in Hadaramout, Yemen. Green or light coloured Frankincense tears are mostly for internal use. It contains a higher rate of boswellic acids than the darker resin. It has been used in treating various conditions from sinuses, asthma, arthritis and to reduce menstrual pain and much more. For internal usage see below. For incense purposes this resin is best burnt on charcoal discs available here. 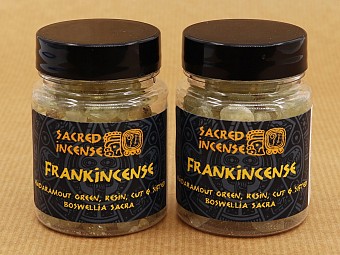 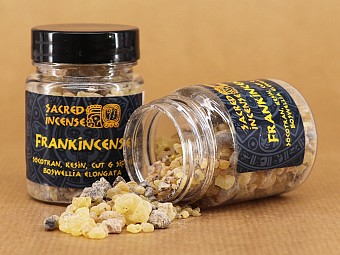 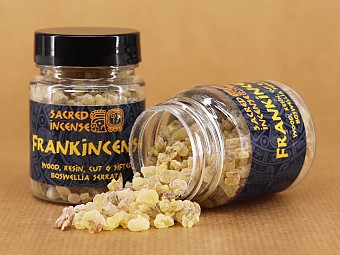 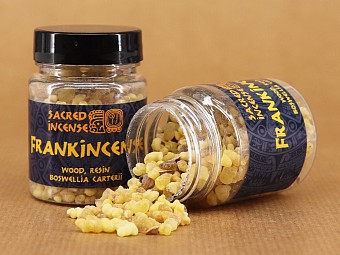 The word "incense", meaning originally "the aroma given off with the smoke of any odoriferous substance when burnt", has been gradually restricted almost exclusively to Frankincense, also known as Olibanum. Frankincense has always been obtainable in Europe in greater quantity than any other of the aromatics imported from the East. The botanical origin of Frankincense are species in the Boswellia genus. Species such as B.carterii, B.serrata and B.sacra are used as a source of Frankincense though they all differ in quality. In use for over 5000 years, this fragrant desert resin has been prized by many cultures around the world for its therapeutic and spiritual properties. Frankincense has become the most important ingredient of incense used in the catholic church.

The world’s finest and luxurious Frankincense resin since ancient times is harvested from the Boswellia sacra tree in southern Arabia. Its status as the most sought-after and desirable type of Frankincense is undisputed. Frankincense from Yemen was used by some of the most elite people in history. It is believed to have been one of the favourite essences to Cleopatra and the Queen of Sheba. European explorers the like of Marco Polo and Lawrence of Arabia purportedly visited the Frankincense trail. The Frankincense we offer from Yemen is from a small hidden side valley of Hadaramout. In Arab tradition there are 2 different grades of Frankincense resin. Grade 1 is the resin which is good for internal use (therapeutic properties) and grade 2 which is preferred for incense.

Amongst the grades exclusively sourced from Yemen the green and light coloured frankincense tears are mostly used for internal use. It contains a higher rate of boswellic acids than the darker resin. Boswellic Acids have been the subject of research on their potential for therapeutic value in cancer treatment though more research is required. The green resin is most potent for internal use and as incense. It has been used to treat asthma, arthritis, menstrual pain and sinus issues amongst mainly other ailments.

The second major benefit to the grade 1 frankincense is its ability to help elevate ones spirit whilst in state of meditation (utilisation as incense). All other frankincense resin excluding the green and lighter varieties are mostly used as incense. It contains more essential oil and therefore has more depth in scent. Most essential oil distilleries choose the dark coloured frankincense for essential oil production. Merely being less costly than the top grade allows many Arab families to burn Frankincense as incense mostly more than once a day. It's definitely not recommended for internal use. The rich warm aromatic bouquet of the dark Frankincense has been used to alleviate depression, anxiety stress and clearing a space of negative energies.

Sacred Incenses. We offer a unique collection of the rarest plants that are used as an incense for ceremonial purposes or healing. A carefully selected range of the finest incense herbs, woods, resins and incense mixtures from around the world.

Our packaging is small, and the textures of our incenses and blends are very fine. They come in the form of powder, fine grained cut and sifted grains of leaves, flowers, wood or resin. This fine-ness allows for precise blending of your personal mixtures, and allows for subtle application in a small and dedicated setting. This collection offers a great palette of fragrances to create a beautiful setting for an inner journey or ceremony.

Frankincense was one of the most highly praised substances of the ancient world. It was traditionally produced in Yemen and Oman, and by 1000 BC, Frankincense was already a rare and important product. Babylon, Assyria, Egypt, Rome, Greece, and China, all made use of this resin. The oldest written record of incense was found in the tomb of queen Hathsepsut from the 15th century BC. Frankincense was an important trade product, and Plinius the Elder wrote that control of the Frankincense trade had made the south Arabians the richest people on earth. For this reason, the Romans later tried to conquer the Frankincense producing regions, but they did not succeed.

In those days, Frankincense was more precious than gold. Frankincense is also named "Olibanum", derived from "Al Luban", the Arabic word for milk. The kohl, or black powder with which the Egyptian women paint their eyelids, is made of charred Frankincense, or other odoriferous resins mixed with Frankincense. It is also melted to make a depilatory, and it is made into a paste with other ingredients to perfume the hands. A similar practice is described by Herodotus as having been practiced by the women of Scythia and is alluded to in Judith x. 3 and 4. In cold weather, the Egyptians warm their rooms with a brazier whereon incense is burnt, Frankincense, Benzoe (Styrax benzoe) and Aloe wood (Aquilaria agallocha) being chiefly used for the purpose.

The ceremonial incense of the Jews was compounded of four "sweet scents", of which pure Frankincense was one, pounded together in equal proportion. It is frequently mentioned in the Pentateuch. Pure Frankincense formed part of the meet offering and was also presented with the shew-bread every Sabbath day. With other spices, it was stored in a great chamber of the House of God at Jerusalem. According to Herodotus, Frankincense to the amount of 1000 talents weight was offered every year, during the feast of Bel, on the great altar of his temple in Babylon.

The religious use of incense was as common in ancient Persia as in Babylon and Assyria, and the modern Parsis of Western India still preserve the ritual of incense. Frankincense became the most important incense burned in catholic churches around the world. Of course, Frankincense played an important role in catholic history. It is said that the three wise men who travelled to Bethlehem to worship the newborn child, Jezus, had with them three gifts: Gold, Myrrh (Commiphora myrrha) and Frankincense.

Frankincense or the 'Boswellia' genus belongs to the Burseraceae (Copal family) and is a small tree or shrub with abundant pinnate leaves and white or pale pink flowers. The plant has a distinctive woody, spicy aroma with a hint of lemon. Native to the Red Sea regions and growing wild throughout North East Africa, Frankincense is produced mainly in Somalia, China and South Arabia and to a lesser extent India.

From this leafy forest tree Frankincense, a natural oleo gum is obtained by making deep incisions in the trunk and collecting the gum given off. This gum, the Frankincense, soon solidifies into tear-shaped amber to orange brown lumps about 1 to 4 cm. The clear lumps are gathered first. The portion which has run down the side of the tree or has fallen to the ground, constitutes an inferior sort. The season for gathering lasts from May till the middle of September, when the first shower of rain puts a close to the gathering for that year.

Due to its relaxing effect on the nervous system, the fragrance of Frankincense incense or oil can help against inner anxiety, improve concentration and help slow down and deepen the breath during meditation. It has also been known to promote a restful sleep. It is soothing and calming the mind. Recommended for meditation, prayer and increasing perception and consciousness.

Frankincense preserves spiritual energy, is an enhancement for meditation, and can help to maintain a clear mind. It is still used ritually in the catholic church during religious ceremonies for devotional cleansing and purification of the soul. It was an important ingredient in the preservation of the bodies of the pharaohs. An important oil for anointing the dead and dying, for assisting in transition and keeping the soul connected to its divine essence. It is excellent for the sixth chakra, assisting in altering perception of truth and promoting clairvoyance.

Frankincense helps to connect to the deepest, most divine, part of ourselves. It has been used in baths with intention to wash away unwanted feelings and energies.

Charcoal discs are necessary for burning non-combustible incenses. Take one disc and place in a heatproof stone dish. Do not hold the disc in your hand while lighting it. Light the edge of the disc with a match or a lighter. The disc will then light across its surface. Once the disc is glowing, small amounts of herbs or powdered resins can be placed on the tablet, during approximately 2 hours.  Charcoal discs are available here.

Internal use (green and light Frankincense resin only):

1. Dissolve 1-3 resin tears in glass of warm water over night, after sifting the water from the solids drink on an empty stomach, you can utilise the tears.
2. Resin can be chewed like chewing gum.