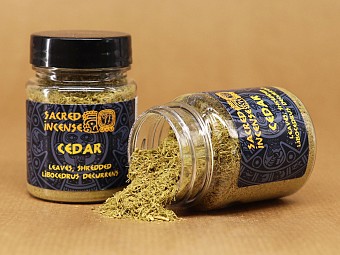 A resinous aromatic tree, widely grown as a handsome ornamental. Incense Cedar is often used in the sweat lodge ceremony. The smoke of burning Cedar is said to attract the good spirits and eliminate negative energies. Powdered leaves, ideal to burn subtly as incense on charcoal.

A resinous aromatic tree, widely grown as a handsome ornamental. Formerly it was also an important timber species, much preferred for the manufacture of pencil due to its softness and isotropy. Although timber harvests have been reduced by depletion of old growth stands, its wood, exceptionally resistant to decay and highly durable when exposed to weather, is still useful for woodworking applications. Incense Cedar is often used in the sweat lodge ceremony. The smoke of burning Cedar is said to attract the good spirits and eliminate negative energies.

The fragrance of IIncense Cedar is said to purify and create a bridge between heaven and earth. It is used to banish nightmares, for smudging sacred spaces and homes. Cedar is often used in the sweat lodge ceremony. A few pinches are thrown on the red-hot rocks, immediately sparking into a yellow glow and releasing their aroma. It can also be burned on Charcoal Disks. The smoke of burning Cedar is said to attract the good spirits and eliminate negative energies.