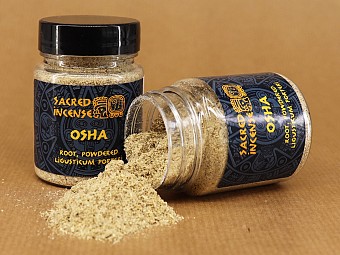 Considered sacred by the Native Americans and widely esteemed for its broad and effective warm healing power. Many tribes burned it as incense for ritual purification to ward off airborne illness in their homes and also subtle negative influences and thoughts. Osha is said to be associated with mystical dreaming. The strength of this herb is immediately apparent by its strong odor. A heavy base note, with a deeply intoxicating fragrance and effect when inhaled. Pure Osha root powdered is ideal for burning on charcoal discs. Extensive information below.

Ligusticum is a genus of flowering plants in the family Apiaceae. Its name is believed to derive from the Italian region of Liguria. Ligusticum is also known as the "Chinese Lovage" and is one of the most popular herbs in China and Korea. It is a perennial plant with hermaphrodite flowers. The root and rhizomes have been used for herbal remedies. In addition to its healing uses, ligusticum was combined with certain foods and beverages as a flavor component, and to add fragrance to some soaps and cosmetics.

The common Mexican name for the plant "Chuchupate" is said to be an ancient Aztec term meaning "Bear medicine". Bears respond to the herb like cats do to Catmint (Nepeta cataria). They will roll on it and cover themselves with its scent. Males have been seen to dig up the roots and offer them to females as part of courting. When a bear first comes out of hibernation, it will eat Osha if it can find it, to cleanse its digestive system. The bear will chew the root into a watery paste, then spit it on its paws and wash its face with the herb. It will then spray the herb over its body as the herb possesses strong action against bodily parasites. It is not known how the bears came to acquire this herbal knowledge, but their use is legendary in all cultures who refer to it as such: Bear medicine. This is the reason that the bear is considered to be the prime healing animal in many cultures because it uses plants for its own healing. Any plant that is considered to be "Bear medicine" is a potent and primary one.

Related to Lovage (Levisticum officinale) and a member of the Umbelliferae (Carrot family), Osha is a perennial, growing above 7,000 feet throughout the entire Rocky Mountain range from Mexico to Canada. The plant stands about two or three feet in height and posseses the characteristic umbel (umbrella) flower shape, and leaves that look a little like Parsley (Petroselinum crispum). It can be stubborn and strong, often growing in aspen groves among their roots, making digging very difficult. It is one of the few herbs that can be dried in the sun without harm and will last for years in the dried form. It will not rot because of the potent antibacterial and antiviral substances in the root.

This is one of the most important herbs of the Rocky Mountains, considered sacred by the Native Americans and widely esteemed by them for its broad and effective warm healing power. Many tribes burned it as incense for ritual purification to ward off airborne illness in their homes and also subtle negative influences and thoughts. Osha is said to be associated with mystical dreaming as well. The strength of this herb is immediately apparent by its strong odor.