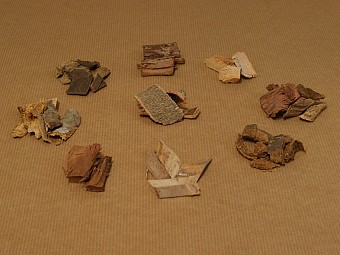 The Nine Herbs consists of nine barks of specific trees from the Amazon region each with its particular properties, but also as a composite elixir for general well being. More information can be found below.

Nine Herbs (Nove Vegetais) is the name of a blend of 9 different treebarks.

The Uniao de Vegetal had a tradition to prepare a special Oasca or Vegetal as they call the Ayahuasca, where they added nine other plants with particular healing properties. This particular brew was more more focused on physical healing, apart from spiritual healing, although these things have always been seen to go hand in hand within in the Ayahuasca traditions. This wasn’t a preparation used in their regular ceremonies but more for special occasions and healing sessions. They have officially discontinued this practice in 2001 for lack of scientific claims as to the healing qualities of these plants but the practice of adding other plants apart form Caapi and Chacrona to Ayahuasca has been a traditional practice since immemorial times. It is thought that Mestre Gabriel, the founder of the UDV, learned this practice during his time with the Vegetalists in the rubber colonies in the forest where they lived.

The Nine Herbs consists of nine barks of specific trees from the Amazon region each with its particular healing properties, but also as a composite elixir for general well being and overall health. Recommended use when preparing is to use 5 grams of each bark, per preparation of 10 kg of Caapi vine.