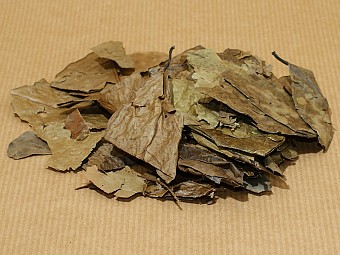 Whole leaves of Guayusa, or Huayusa. Ethically and sustainably wildharvested in the tropical rainforest, area Amazonas, Rio Maranon, Peru. Generally used as a tea. Interestingly, the leaves can also be used in Rapé preparations, by adding the finely powdered leaves, or the ashes thereof, to the recipe. For more information see below. 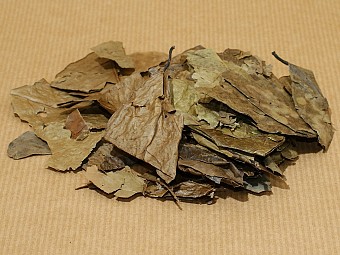 Guayusa is used by people of the Amazon to make an energising tea. It also has the interesting effect of inducing lucid dreaming. For this reason, it is known as the "Watchman's plant", as even when sleeping you are aware of your external surroundings. And when dreaming, you are aware that you are in the dream.

For those interested in shamanic dreaming this is certainly the plant to explore. It is used along with Ayahuasca to help ease bitterness, to stay awake during Ayahuasca ceremonies, and to help prevent hangover effects.

Guayusa leaves have been discovered in burial sites with snuff and enema paraphernalia indicating ancient use. Guayusa leaves are dried and strung together in packets, which are then strung together to form large wreaths. Throughout the Amazon these wreaths can be seen hanging outside local tiendas.

The tree grows wild and is also cultivated for caffeine preparations. Guayusa leaves are sold as herbs in markets in Pasto (Colombia) and Quito (Equador).

The first account of the use of Guayusa is from a letter by Lucero from 1683, describing the activities of medicine men of the Jívaro Indians in drinking certain beverages during the performance of their medico-magical rites: "They put together these evil herbs (Datura (Datura stramonium), Ayahuasca (Banisteriopsis caapi), and other narcotic plants], with Guañusa and Tobacco (Nicotiana tabacum, Nicotiana rustica), also invented by the devil, and allow them to boil until the small remaining quantity of juice becomes the quintessence of evil, and the faith of those who drink it is rewarded by the devil with the fruit of malediction, and always to the great misfortune of many..."

The Jívaro Indians were, according to Lucero, well disposed people of good physical appearance. "To maintain themselves at their best, they were accustomed to drink a decoction of an herb called Guayusa, similar to Laurel (Laurus nobilis), several times daily. They were thus able to stay awake without losing consciousness for many nights, when they feared invasion by enemies". The Jívaro Indians also attribute to Guayusa a narcotic or hypnotic effect for inducing Pequeños sueños ("Little dreams"), and for knowing in advance whether a hunting expedition will be successful.

Guayusa was known not only in the Ecuadorian-Peruvian sector of the east Andean foothills, but in the Putumayo-Caquetá belt of Colombia too. From observations made during the decade 1756-1767, the Majorcan missionary Juan Serra notes "Guayusa has the color of dark honey, and five leaves are enough to make a Chocolate-pot full of its juice. Its taste is like tea but finer and more pleasant. When I drank it, I began to sweat and expectorate so much that I was obliged to change my habit, and within half an hour coughed enough phlegm to fill a large cup. These effects seemed to me to be very good."[1]

Michael Harner, the founder of the Foundation for Shamanic Studies describes how “the Jivaro say Guayusa is so habituating that before it is offered to a visitor, he is warned that once he drinks it, he will ever always after return to the Ecuadorian Jungle.”  The Kichwa people claim that Guayusa induces dreams that foretell whether hunting expeditions will be successful.

A 1,500-year-old bundle of Guayusa leaves was found by Harvard University ethnobotanist Richard Evans Schultes in a tomb high in the Bolivian Andes, far beyond the natural range of the plant.[3]

Ilex guayusa is from the Aquifoliaceae (Holly family), in a family of over 450, which are widely distributed in both hemispheres. Most grow in tropical Central and South America. Ilex is among the largest of Holly trees, cultivated for their caffeine content.[2]

Guayusa contains caffeine (~2%), guaranin. In addition Guayusa also contains theobromine, a stimulant commonly found in Chocolate (Theobroma cacao), and L-theanine, a glutamic acid analog found in Green Tea (Camellia sinensis) that has been shown to reduce physical and mental stress. Chemical analyses in 2009 and 2010 have shown caffeine content in Guayusa of 2.90-3.28% by dry weight. Guayusa contains all of the essential amino acids for humans and has a “high antioxidant activity,” with ORAC antioxidant values of 58μM per gram, compared to 28-29μM per gram for commercial Green Tea.[3] There have been few published studies on the possible medical benefits of Guayusa, but one study has shown that ingesting Guayusa helped reduce hyperglycemia and other side-effects of Type 1 diabetes in an animal model.[3]

For making a delicious Guayusa tea, one teaspoon of cut leaf (~6 grams) or 2 whole leaves are enough for one cup of water. Guayusa should be brought to the boil very shortly and then left to steep for 5-8 minutes. Be careful not to let it boil for too long, as otherwise the flavor releasing oxygen will boil away, resulting in a flat taste.  Alternatively, a cold extract can be obtained by leaving the leaves for 4-6 hours - or longer - in a big glass jar. Add honey, agave, or lemon as desired. Guayusa is naturally sweet and can also be used for making a tasteful iced tea by adding a bit of lemon.

Guayusa is often used before and during Ayahuasca ceremonies, or mixed in the brew.