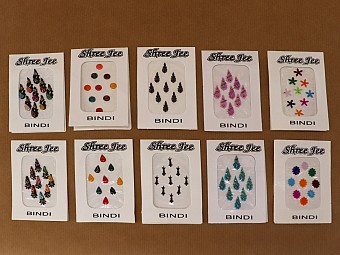 The Bindi (Sanskrit meaning point, drop, dot or small particle) is a popular symbol often in red, worn on the forehead between the eyebrows, mainly by Hindu and Jain women and men. Not only they suit as decoration on the forehead, they can of course be placed anywhere on the face or the body.

One package contains 10 different sets of Bindi, in total 100-120 individual bindi of various forms, materials and sizes, as shown on the image.

The Bindi (Sanskrit meaning point, drop, dot or small particle) is a popular symbol often in red, worn on the forehead between the eyebrows. It is traditionally worn by Hindu and Jain men and women. It is commonly used by Hindu women to demonstrate they are bound in marriage and can be considered to represent honour, love and prosperity. There are however various other traditional and religious reasons for their use. Symbolically (and literally perhaps) the Bindi marks the spot where creation is considered to manifest, which falls on the 3rd eye and is considered a seat of higher knowledge.

Nowadays however the use of Bindi has spread outside the Indian sub continent and are worn by many for decorative purposes. Bindi were originally and still applied with various dyes, waxes and pigments but are also available as various symbols that can be stuck to the forehead such as the ones we have available here. Not only they suit as decoration on the forehead, they can ofcourse be placed anywhere on the face or the body, or even used to pimp or personalize your personal belongings such as for example your Kuripe or Tepi, or your lighter, phone or anything else you can think of. They are self adhesive.

One package of 10 contains a wide variety of Bindi in all kinds of colours, shapes, forms and materials. The total sum of individual Bindi in this package is between 100 and 120 pcs, as shown on the image.