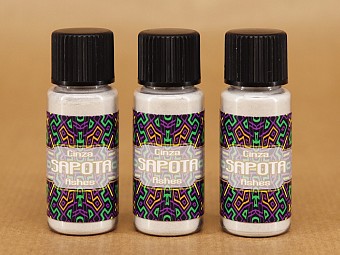 (Batch #0900). Sapota is a little known ash that gives strength to Rapé and makes it particular good for meditation. It is fairly gentle on the nasal passages. A very fine and genuine ash from Kuntanawa sources. Since the tree gives food and feeds the people it is considered a nutritious medicine even in ash form. More information below. 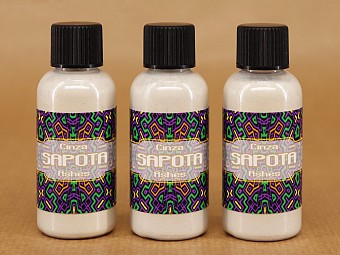 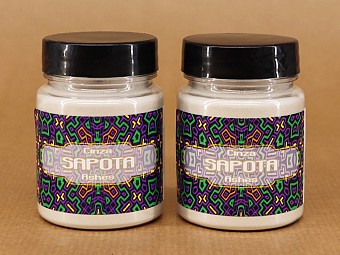 Sapota is a very special and rare ash that comes from the upper Jurua region from the Kuntanawa people. The Sapota tree is refered to as a mother tree that provides food and medicine. The fruits and inner bark are eaten. The fruit is quite delicious. It's considered a medicine that firms the spirit and gives strength. The Capelao monkeys sing in these trees in the late night waking and calling all the beings of the forest. Sapota is a little known ash that gives strength to the Rapé and makes it particular good for meditation. It is fairly gentle on the nasal passages and can be perceived when using more then once in a day as clogging the channels a lot a less then other types of ash. Since the tree gives food and feeds the people it is considered a nutritious medicine even in ash form. This cinza is collected for us by a friend who was travelling the South Americas, visiting many remote tribes.

This exquisite ingredient is a crucial element of a powerful and balanced blend and should not be omitted in your own favorite rapé composition. Ashes mix excellently with any of the Tabaco powders. Furthermore, blending Tabaco with ashes increases the strength and absorption, making it exquisitely strong. As one, after getting more familiar with the use of indigenous Rapé, will start to notice that all ashes have their own quality and effect, some more light on the nose, some a bit sharp, some making the Rapé stronger and all have their particular medicinal qualities.

It is an extremely fine powder. It takes great effort to produce such a fine powder at a 100 micron fineness. This is our standard. All of our products we process to a high standard and consistent fineness, using laboratory grade seives.