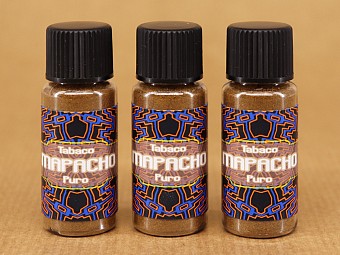 (Batch #3094). Mapacho is made from Nicotiana rustica, which is about 20 times stronger than our traditional Tabaco, Nicotiana tabacum (Stanfill et al. 2010). Indigenous tribes use Mapacho in ceremonies, to predict good weather, fishing or harvest, and for spiritual (e.g. vision quest, trance etc) and curing purposes (Wilbert 1987), but rarely for smoking. It is one of the oldest and most potent curing plants known to indigenous tribes. Origin: Iquitos, Peru. More information below. 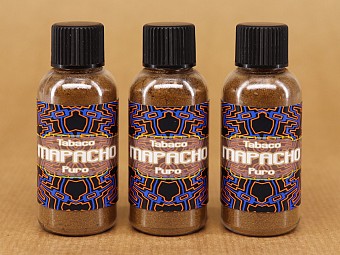 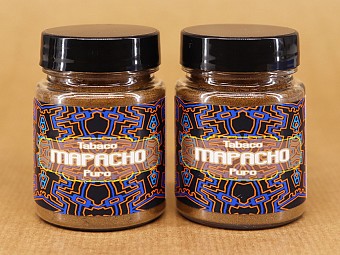 This is the finest pure Mapacho powder, made from traditional "Mapacho masos", which are tightly bundled fermented dark leaves from the jungle in Iquitos, Peru.

Juicy and fresh, are Mapacho Masos. It is an elaborate and patient process to produce an absolutely dehydrated fine (150 micron) powder. The fresh and juicy masos were cut into small pieces, sun-dried, crushed, dehydrated, deveined, and then ground and sieved multiple times, to obtain the finest powder. This sacred, wholesome plant can bring profound clarity and help to remove negative energies. Mapacho is made from Nicotiana rustica, which is about 20 times stronger than our traditional Tabaco, Nicotiana tabacum (Stanfill et al. 2010). Indigenous tribes use Tabaco in ceremonies, to predict good weather, fishing or harvest, and for spiritual (e.g. vision quest, trance etc) and curing purposes (Wilbert 1987), but rarely for smoking. It is one of the oldest and most potent curing plants known to indigenous tribes.

This is an extremely fine powder, creamy to the touch. It takes great effort to produce such a fine powder, entirely void of stems, veins, grains and bits, and at a 150 micron fineness. This is our standard. All of our Rapé varieties are processed to a high standard and a consistent fineness, using laboratory grade sieves and milling equipment.

In addition to Ayahuasca rituals that are combined with Tabaco snuffs, there are even shamans that specialised in Tabaco healing, called tobaqueros (Jauregui et al. 2011). When used in shamanic rituals, Tabaco is assumed to protect, cleans and re-align energies, thereby bringing profound clarity and healing (Jauregui et al. 2011). Furthermore, South American shamans, commonly use Tabaco smoke to blow it over the person to be healed with the intention to bring their energies into equilibrium and clean out all negativity and anxiety (i.e. ‘sopladas’ – the healing energy of blowing) (Jauregui et al. 2011). Thus, Tabaco in the shamanistic culture has a potent function of cleansing, bringing clarity and focus, and for allowing strong visualisations.

This powder is made from fermented Mapacho logs. The Mapacho logs are cut into small pieces, then dried, deveined, ground, dehydrated and sieved multiple times to achieve the finest dust of a dry and flowing powder.