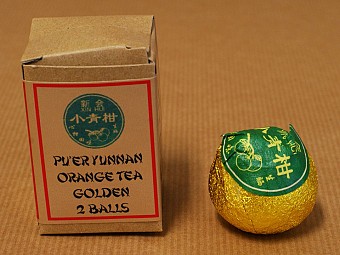 Gold Orange Pu'er is a specific type of tea, combining the refreshing fragrance of "Xinhui" citrus fruit with the aged flavour of palace ripened Pu-er tea. Clementines are hollowed out and filled with Pu'er tea, then aged. The opening at the top is easy to remove. The brew is bright and dense red in color, tasting slight sweet and offering a smooth and soft mouthfeel with the tangy citrus flavour, giving a very cool aftertaste and comfortable throat finish. It can be used to shortly brew large pots of tea, or taken apart for smaller portions. Detailed information below. 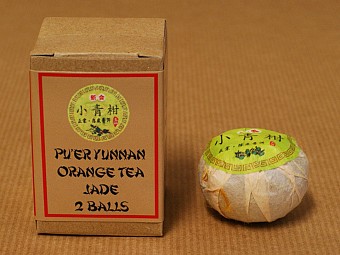 Orange Pu'er is a specific type of tea, combining the refreshing fragrance of "Xinhui" citrus fruit with the aged flavour of palace ripened Pu-er tea. Produced in Jiangmen City in the Guandong provence in China. Clementines are hollowed out and filled with Pu'er tea, then aged. The Pu'er tea leaves thus obtained when steeped, have a zesty orange smell and the tea is smooth and malty with hints of orange, especially if you use part of the rind while steeping. It is a very tasty functional tea to help to lose weight, promote digestion, to remove toxins, refresh, and to aid in lowering cholesterol levels. Each weighs about 8-11 gr including greenish brown peel. The opening at the top is easy to remove. The fruit flesh and the little hole at the bottom is convenient for drying, transforming and brewing. The brew is bright and dense red in color, tasting slight sweet and offering a smooth and soft mouthfeel with the tangy citrus flavour, giving a very cool aftertaste and comfortable throat finish. It has a low caffeine content, less than 10% of a cup of coffee. It can be used to shortly brew large pots of tea, or taken apart for smaller portions.

Pu’er or Pu'er tea (pronounced ‘poo-air’) is a highly prized and popular fermented tea produced in the Yunnan province of China. It is renowned both for its purported health benefits and because it is aged, in some cases for many decades to develop its depth of flavour. Fermentation is a tea production style in which the tea leaves undergo microbial fermentation and oxidation after they are dried and rolled. This process is a Chinese specialty and produces tea known as Hei Cha (黑茶), commonly translated to dark, or black tea (this type of tea is completely different from what in West is known as "black tea", which in China is called "red tea"). Like other teas it is collected from the plant Camelia sinensis however Pu’er is made from a specific broad leaf variety of the tea plant (Camelia sinensis var assamica) known colloquially as Da Ye Zhong (大叶种). The leaves are harvested from varying aged trees, the most prized being many hundreds of years old, known as GuShu. Unlike other teas Pu’er tea undergoes microbial fermentation as it ages and like a fine wine. Aged Pu’er tea changes in character becoming more mellow with more complex deep notes. Some Pu’er teas can be aged for 20, 30 years or longer. As with wines Pu’er becomes more valuable and highly sought after as it ages.