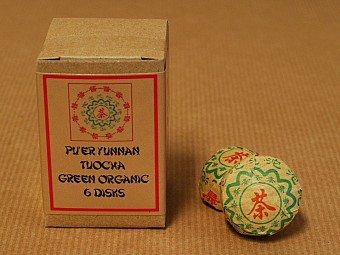 Menghai Ripe Tuocha Puer, produced in Xishuangbanna, Linyia. This is a Ripe Puer from the famous Menghai factory. It is pressed into small disks or bird nests (tuocha). The tea is a red/brown hue and it has a smooth, earthy taste and aroma without any bitterness. Cleansing on the pallet.

This is a Ripe Puer from the famous Menghai factory. It is pressed into small disks or bird nests (tuocha). The tea is a red/brown hue and it has a smooth, earthy taste and aroma without any bitterness. Cleansing on the pallet.

Carefully separate the desired amount of tea leaves from the cake (approx 3-5g per 100ml of water). Place the Pu'er in your teapot and rinse the leaves, pot and cups with boiling water, discarding this water immediately to remove any impurities. Then to brew your tea, for ripe Pu'er fill your teapot with boiling water, or for raw Pu'er use water at 85c. For the initial brew steep the water for 10-20 seconds, and for each subsequent brew, add another 5-10 seconds of brewing time or until the desired strength has been reached. You are looking for a clear and bright tea, with deep mahogany hues.

Raw Pu'er and maocha; After picking appropriate tender leaves, the first step in making raw or ripened pu'er is an optional wilting/withering stage, thus converting the leaf to maocha (青毛茶 or 毛茶; literally, "light green rough tea" or "rough tea" respectively). Plucked leaves are handled gingerly to prevent bruising and unwanted oxidation. Weather permitting, the leaves are then spread out in the sun or a ventilated space to wilt and remove some of the water content. On overcast or rainy days, the leaves will be wilted by light heating, a slight difference in processing that will affect the quality of the resulting maocha and pu'er. The wilting process may be skipped altogether depending on the tea processor.

The leaves are then dry pan-fried using a large wok in a process called "kill green" (殺青; pinyin: shā qīng), which arrests most enzyme activity in the leaf and prevents full oxidation. After pan-frying, the leaves are rolled, rubbed, and shaped into strands through several steps to lightly bruise the tea and then left to dry in the sun. Unlike green tea produced in china which is dried with hot air after the pan-frying stage to completely kill enzyme activity, leaves used in the production of pu'er are only pan-fried and thus a small amount of enyzmes are left which contribute a minor amount of oxidation to the leaves during sun-drying. The bruising of the tea is also important in helping this minimal oxidation to occur and both of these steps are significant in contributing to the uniqueness of Pu'er tea. Once dry, maocha can be sent directly to the factory to be pressed into raw pu'er, or to undergo further processing to make ripened pu'er. Sometimes Mao Cha is sold directly as loose-leaf "raw" Sheng Cha or it can be matured for 2-3 years in loose leaf form due to the faster rate of natural fermentation in an uncompressed state. This product is then pressed into numerous shapes and sold as "raw" Sheng Cha as a more matured final product.

Ripe pu'er; "Ripened" Shou Cha (熟茶) tea is pressed maocha that has been specially processed to imitate aged "raw" Sheng Cha tea. Although it is also known as cooked pu'er, the process does not actually employ cooking to imitate the aging process. The term may come about due to inaccurate translation due to the dual meaning of shú (熟) as both "fully cooked" and "fully ripened".

The process used to convert máochá into ripened Pu'er is a recent invention that manipulates conditions to approximate the result of the aging process by prolonged bacterial and fungal fermentation in a warm humid environment under controlled conditions, a technique called Wò Dūi (渥堆, "wet piling" in English), which involves piling, dampening, and turning the tea leaves in a manner much akin to composting.

The piling, wetting, and mixing of the piled máochá ensures even fermentation. The bacterial and fungal cultures found in the fermenting piles were found to vary widely from factory to factory throughout Yunnan, consisting of multiple strains of Aspergillus spp., Penicillium spp., yeasts, and a wide range of other microflora. Control over the multiple variables in the ripening process, particularly humidity and the growth of Aspergillus spp., is key in producing ripened Pu'er of high quality. Poor control in fermentation/oxidation process can result in bad ripened Pu'er, characterized by badly decomposed leaves and an aroma and texture reminiscent of compost. The ripening process typically takes anywhere from half a year to one year after it has begun. As such, a ripened Pu'er produced in early 2004 will be pressed in the winter of 2004/2005, and appear on the market between late 2005 and early 2006.

This process was first developed in 1972 by Menghai Tea Factory and Kunming Tea Factory to imitate the flavor and color of aged raw Pu'er, and was an adaptation of wet storage techniques being used by merchants to falsify the age of their teas. Mass production of ripened Pu'er began in 1975. It can be consumed without further aging, though it can also be stored to "air out" some of the less savory flavors and aromas acquired during fermentation. The tea is often compressed, but is also common in loose form. Some tea collectors believe "ripened" Sheng Cha should not be aged for more than a decade. [3]