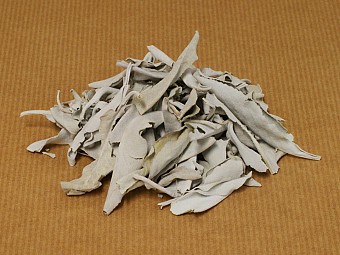 White Sage, or Californian Sage whole leaves. Only leaves, no sticks or stem. White sage is primarily used as an incense, and is burned to give a general sense of well-being, and to drive away specific ailments. Its odour is strong and full, characteristic, bitter and Mediterranean. Loose incense leaves are generally burned on charcoal tablets. More information can be found below. 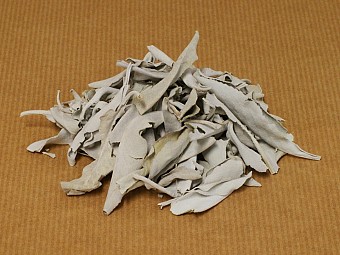 White Sage leaves. This is an exclusive product of pure leaf. No sticks or stems, just whole leaves. White sage is primarily used as an incense, and is burned to give a general sense of well-being as well as to drive away specific ailments. Prior to a healing session Sage is used to clear the area of negative energies, and upon conclusion Sweetgrass (Hierochloe odorata) is burnt to bring in the good energies. Ceder (Thuja plicata, or Libocedrus decurrens), are also used in this way. Burning Ceder also assists while praying and enables ones prayers to travel via the smoke to the Creator (Great Spirit).

Several species are called "Sage" and burned in this fashion, most of them in the Mugwort genus. Salvia apiana, however, is a true Sage, closely related to the Sage used in cooking.

The Cahuilla Indians who referred to White Sage as "Qas’ily" had several uses for this native plant. Seeds were ground into a flour for mush. Seeds were also used as eye cleaners. Leaves were used for flavouring in cooking. They were also crushed and mixed with water to create a hair shampoo, dye and straightener. In addition leaves of the White Sage were used to stop bad luck, presumably for the male hunter, if a menstruating woman came into contact with a male Cahuilla’s hunting gear.[1][3]

A poultice of the freshly crushed leaves can be applied to the armpits to treat body odours.[3]

White Sage, Lamiaceae (Mint family), is a sub-shrub that can reach over 1 meter tall. The leaves are widely lanceolate and tapered at the base. The margin is minutely toothed and rounded. The leaves are generally basal, covered with dense hairs, which gives it a white coloring, and are about 4–8 cm long. The inflorescence is a spike-like clusters with few flowers. The flowers are bilateral, about 12–22 mm in length, and are white with lavender spots and streaks. Both the stamens and styles are exserted. The fruit form into shiny, light brown nutlets that are 2.5–3 mm in size.[2]

White Sage is considered sacred by many Native Americans since it is used to make smudge sticks, a type of incense. White sage is believed to cleanse a space of any evil spirits that may be present. This power is said to be released from the plant by the burning of the leaves, which are typically bundled into a wand or stick. Today many Native American tribes still use the stems and leaves for smudging as part of purification ceremonies. The practice has also been adopted by some modern neopagans.[2]