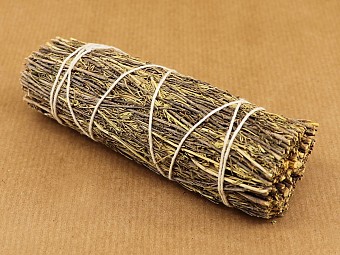 Highly aromatic Desert Sage bundles for smudging as part of a ritual or ceremony.

Big Sagebrush was commonly used by many Native Americans, such as the Navajo. The wood was burned for fuel or used in construction of dwellings. The leaves and the seeds were also eaten. The leaves, which contain Camphor (Cinnamomum camphora), were also used medicinally(1). Navajo weavers boiled the leaves and flowers to create a yellow-gold color, used to dye wool. Ute Indians wove the shredded bark into wicks for candles, and they made sacks of woven bark and lined them with the grass. Native Americans of the Plains Nations cover the floor of their sweat lodge with Sage. They will also breathe through a small bundle of Sage and at times rub the bundle on their bodies while in the sweat lodge. Some tribes commonly wrapped their pipes in Sage before they bundled them up. They believed that objects wrapped in Sage were purified.