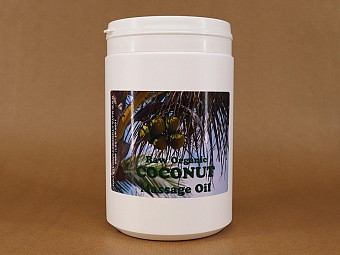 Our coconut oil is made from 100% Coconut oil, produced in Bali, Indonesia. Coconut oil is known for its naturally anti-bacterial, anti-fungal and moisturising. Being very suitable for massage, it hydrates the skin and is suitable for blending with essential oils once melted.

Our coconut oil is made from 100% Coconut oil, produced in Bali, Indonesia.

Coconut oil is very suitable as a massage oil, as it melts at body temperature and has a very good grip on the skin. It is easily absorbed in the skin and has a nurturing and rejuvenating effect. Coconut oil hardens when kept below room termperature. To melt the oil before use place the pot on a warm spot, or place it in a pan of hot water.

The origins of this plant are the subject of controversy, with most authorities claiming it is native to South Asia (particularly the Ganges Delta), while others claim its origin is in northwestern South America. Fossil records from New Zealand indicate that small, Coconut-like plants grew there as long as 15 million years ago. Even older fossils have been uncovered in Rajasthan, Tamil Nadu, Kerala (Kerala means "land of Coconut palms"), Maharashtra, (India) and the oldest known so far in Khulna, Bangladesh. The fruit is light and buoyant and presumably spread significant distances by marine currents. Fruits collected from the sea as far north as Norway have been found to be viable.[1]

On the Nicobar Islands of the Indian Ocean, whole Coconuts were used as currency for the purchace of goods until the early part of the twentieth century. In Sanskrit, the Coconut palm is known as Kalpa Vriksha, meaning "tree which gives all that is necessary for living," because nearly all parts of the tree can be used in some manner or another. The Coconut fruit has many food uses for its water, milk, meat, sugar, and oil. It also functions as its own dish and cup. The husk was burned for fuel by natives, but today a seed fibre called coir is taken from the husk and used to make brushes, mats, fishnets, and rope. A very potent fermented toddy or drink is also made from the Coconut palm's sap. Coconut oil, a saturated fat made from dried Coconut meat, is used for commercial frying and in candies and margarines, as well as in non-edible products such as soaps and cosmetics.[3]

Several Philippine proverbs demonstrate the usefulness of this species: "If you could count the stars, then you could count all the ways the coconut serves us", and "He who plants a Coconut tree, plants vessels and clothing, food and drink, a habitation for himself, and a heritage for his children."

The Coconut Palm, genus Arecaceae (Palm family)is a long-lived plant that may live as long as 100 years; it has a single trunk, 20-30 meters tall, its bark is smooth and grey, marked by ringed scars left by fallen leaf bases. The leaves, from 4 to 6 m long, are pinnate; they consist of linear-lanceolate, more or less recurved, rigid, bright green leaflets. The inflorescences, arising at leaf axils and enveloped by a carinate spathe, are unbranched spadices; female flowers are borne basally, male flowers at apex. Flowers bear lanceolate petals, 6 stamens and an ovary consisting of 3 connate carpels. Cross pollination, either anemophilous or entomophilous, occurs. Its fruit, as big as a man's head and 1-2 kg in weight, is a drupe with a thin, smooth, grey-brownish epicarp, a fibrous, 4-8 cm thick, mesocarp and a woody endocarp; as it is rather light, it can be carried long distances by water while keeping its germinability for a long time.

Although it takes up to a year for Coconuts to mature, the trees bloom up to thirteen times a year. Fruit is constantly forming, thus yielding a continuous harvest year-round. An average harvest from one tree runs about 60 Coconuts, with some trees yielding three times that amount.

This is a food product. It is packaged and delivered as bulk herb product, for further processing and repackaging, and is not intended as a consumer package.
The buyer is responsible for appropriate handling, repacking and labeling this product according your local regulations.