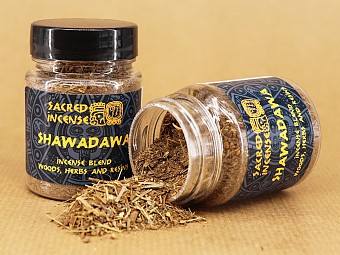 An exquisite incense mix handcrafted by the Shawãdawa Tribe. It is a beautiful and powerful mixture of herbs and resins used by the Shawãdawa and other tribes for spiritual cleansing. It contains the resin known as Brazilian Frankincense, that the indigenous people of the region call Cipá and is also known as Breu Branco. The incense is for using on charcoal tablets. More information can be read below.

Shawãdawa Incense Mix is a beautiful and powerful mix of herbs and resins used by the Shawãdawa and other tribes for spiritual cleansing. It contains the resin known as Brazilian Frankincense, that the indigenous people of the region call Cipá and is also known as Breu Branco. It is said by the tribes that it is a smell that sickness can't stand and when somebody is sick or there are other problems, or in spiritual works in general it is always burned in abundance. Another herb used in this mix is called Sãssara, a herb known for its beautiful smell and also used in other mixtures like herbal baths and Rapé for energetic cleansing. Apart from the herbs used for their scent, dried Yagube vine is mixed in for its general spiritual power of cleansing and strengthening.

This Shawãdawa Incense Mix has been handcrafted by a friend of our contact, Adeildo Shawakaya. Adeildo, one of the new generation members of his people, is very dedicated to saving what is left of their legacy, and is studying the language, traditions and medicines of his people. His mother, Dona Francisca is well known around Brazil as a herbal healer, a prayer and also a very respected traditional midwife having brought many into this world. Adeildo studies the plants in the tradition of his people but is also a long term member of the Santo Daime.

Adeildo has this to say about the incense:

“Shawãdawa smudging herbal mix is generally used to clean the environment in the spiritual work sessions. It can be used to purify other spaces like your home to draw out negative energy. Our mix is made with traditional herbs and resins from our tradition. We mixed Breu Cipá, a sap extracted from a tree that is used with great wisdom by the shamans to do healing work, we use it to frighten yuxin, as we call negative spiritual forces that bring negative energies and in the long term sickness. We also have used Sãssara, a very fragrant medicine that serves to remove disturbances of the mind and the spirit. Apart from those we also mixed in the powder of Jagube Vine, to strengthen spirituality. It is used by burning charcoal in a brazier and throwing some of the mix on the coals to free up the perfume of each of the essences.”