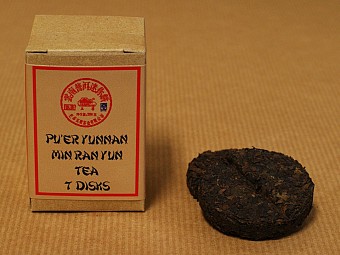 Min Ran Yun Pu'er tea cakes are made of tea leaves plucked from wild tea trees. They are produced in 2017 by Chinese Tea Group. As the tea cakes are made by compressing tea leaves plucked from wild tea trees hundreds of years old, the tea has top-grade quality and is well worth collecting like an antique. It also contains rich nutrients and is very good for the health. It is favoured by tea lovers. Detailed information can be found below.

Min Ran Yun Pu'er tea cakes are made of tea leaves plucked from wild tea trees. They are produced in 2017 by Chinese Tea Group. As the tea cakes are made by compressing tea leaves plucked from wild tea trees hundreds of years old, the tea has top-grade quality and is well worth collecting like an antique. It also contains rich nutrients. It is a favoured by tea lovers.

There are many purported health benefits associated with Pu’er.