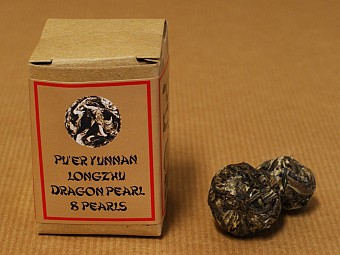 Yunnan Dayezhong sundried green and white tea leaves balls, called "Dragon Pearls". These tea leaves are plucked during moonlight by young local women hence its name “Moonlight Beauty”. Due to the black and white colouration of each bud with its two leaves, it is said to resemble the moon and night sky. This tea has a silky, floral taste reminiscent of honey and has a mouthfeel of good quality white tea. If brewed longer the colour and taste develop in complexity with a deeper rich russet colour and stronger “classic tea” aroma. Detailed information below.

Yunnan Dayezhong sundried green and white tea leaves balls, called "Dragon Pearls". These tea leaves are plucked during moonlight by young local women hence its name “Moonlight Beauty”. Due to the black and white colouration of each bud with its two leaves, it is said to resemble the moon and night sky. This tea has a silky, floral taste reminiscent of honey and has a mouthfeel of good quality white tea. If brewed longer the colour and taste develop in complexity with a deeper rich russet colour and stronger “classic tea” aroma.