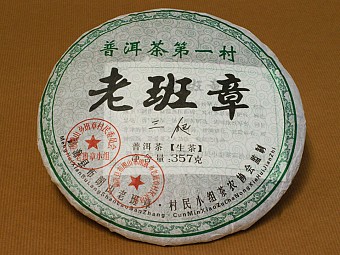 Laobanzhang Raw Green Puer from 2008. The secret of making Pu'er tea has been closely guarded in China for centuries. The tea leaves are collected from growers of a special broad-leaf tea tree, which are said to be related to ancient prehistoric tea trees. The leaves go through two types of fermentation, which gives this tea its unique characteristics; a mild, but distinctively earthy flavour. Pu'er teas are much like fine wines, which become smoother and more balanced with age.

Laobanzhang Raw Green Puer from 2008. The secret of making Pu'er tea has been closely guarded in China for centuries. The tea leaves are collected from growers of a special broad-leaf tea tree, which are said to be related to ancient prehistoric tea trees. The leaves go through two types of fermentation, which gives this tea its unique characteristics; a mild, but distinctively earthy flavour. Pu'er teas are much like fine wines, which become smoother and more balanced with age.

Pu’er or Pu'er tea (pronounced ‘poo-air’) is a highly prized and popular fermented tea produced in the Yunnan province of China. It is renowned both for its purported benefits and because it is aged, in some cases for many decades to develop its depth of flavour. Fermentation is a tea production style in which the tea leaves undergo microbial fermentation and oxidation after they are dried and rolled. This process is a Chinese specialty and produces tea known as Hei Cha (黑茶), commonly translated to dark, or black tea (this type of tea is completely different from what in West is known as "black tea", which in China is called "red tea").  Like other teas it is collected from the plant Camelia sinensis however Pu’er is made from a specific broad leaf variety of the tea plant (Camelia sinensis var assamica) known colloquially as Da Ye Zhong (大叶种). The leaves are harvested from varying aged trees, the most prized being many hundreds of years old, known as GuShu. Unlike other teas Pu’er tea undergoes microbial fermentation as it ages and like a fine wine. Aged Pu’er tea changes in character becoming more mellow with more complex deep notes. Some Pu’er teas can be aged for 20, 30 years or longer. As with wines Pu’er becomes more valuable and highly sought after as it ages.