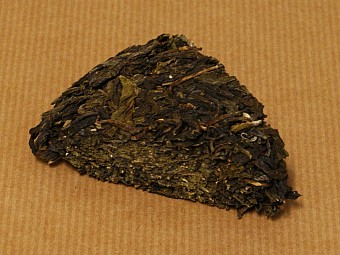 This is a "raw" Pu'er tea, produced in 2007. Very reminiscent of a Green tea, where a light brew is very refreshing with a light yellow hue, and a longer brew produces a much more bitter acquired taste. Produced by the Zhong Cha Company (中茶). Zhong Cha was established in 1949 and it was the first national tea company in China. Within a few years the company expanded and became a major trade company of Chinese tea. This company had been manufacturing high quality Pu-erh tea, Hei Cha, Black tea and Green tea for many years referred to as "Zhong Cha Pai".

An 8th section of a Pu'er tea."disc" weighing approximately 40 gr.

This is a "raw" Pu'er tea, produced in 2007. Very reminiscent of a Green tea, where a light brew is very refreshing with a light yellow hue, and a longer brew produces a much more bitter acquired taste. Produced by the Zhong Cha Company (中茶). Zhong Cha was established in 1949 and it was the first national tea company in China. Within a few years the company expanded and became a major trade company of Chinese tea. This company had been manufacturing high quality Pu-erh tea, Hei Cha, Black tea and Green tea for many years referred to as "Zhong Cha Pai".

Pu’er or Pu'er tea (pronounced ‘poo-air’) is a highly prized and popular fermented tea produced in the Yunnan province of China. Fermentation is a tea production style in which the tea leaves undergo microbial fermentation and oxidation after they are dried and rolled. This process is a Chinese specialty and produces tea known as Hei Cha (黑茶), commonly translated to dark, or black tea (this type of tea is completely different from what in West is known as "black tea", which in China is called "red tea").  Like other teas it is collected from the plant Camelia sinensis however Pu’er is made from a specific broad leaf variety of the tea plant (Camelia sinensis var assamica) known colloquially as Da Ye Zhong (大叶种). The leaves are harvested from varying aged trees, the most prized being many hundreds of years old, known as GuShu. Unlike other teas Pu’er tea undergoes microbial fermentation as it ages and like a fine wine. Aged Pu’er tea changes in character becoming more mellow with more complex deep notes. Some Pu’er teas can be aged for 20, 30 years or longer. As with wines Pu’er becomes more valuable and highly sought after as it ages.