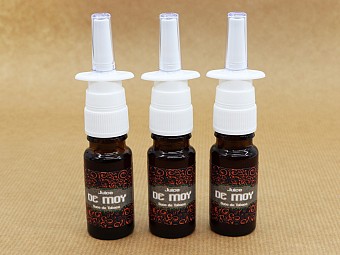 Tabaco de Moy is one of the most beautiful of all Rustica types available. The scent is just divine. Suco de Moy nose spray provides the distinct aroma and character of Brazilian Moy Tabaco. Mild at first impact but then it comes in pretty strong and releases a lot of fluids in the sinuses. Very cleansing. This is a fine liquid extract obtained by extracting Brazilian Moy Tabaco in a hydro-alcoholic solution followed by evaporation into a juicy extract. Apply one or two sprays high up in each nostril, while slightly breathing in through the nose. Do not swallow the residue but spit it out. More information below.

Suco de Moy is a fine liquid extract obtained by extracting Brazilian Moy Tabaco in a hydro-alcoholic solution followed by evaporation of the solution into a juicy extract. The extract comes in 12 amber glass bottles with nose-spray dispenser. Apply one or two sprays high up in each nostril, while slightly breathing in through the nose. Tabaco juice has a strong effect on focus and presence, it provides powerful grounding and stops all the chattering of the mind. The juice has a profound cleansing effect on the sinuses and it opens the heart and mind. It is a traditional medicine, and it is widely used through the continents by different shamans and healers. Some alcohol was added to the liquid extract to ensure a long shelf life.

Tabaco juice is traditionally taken from a shell, whose tip is inserted into the nose and then tilted back to forward the juice down the nostrils into the back of the throat where it is swallowed. It is important to treat each nostril, as both sides have separate properties: the left side is used for expelling negative energy and the right side is used for receiving good energies, balance, and health.

Advised is to allow the fluids to go outward by blowing the nose, and that the remains are not swallowed but spit out.

Tabaco de Moy is one of the most beautiful of all Rustica types available. The scent is just divine. This nose spray provides the distinct aroma and character of Brazilian Moy Tabaco. Mild at first impact but then it comes in pretty strong and releases a lot of fluids in the sinuses. Very cleansing.

Tobacco is one of the most traditional and most wholesome plants of the Amazon. It is used alone by shamans that specialized in tobacco (tabaqueros) or it is used in combination with other plants, like ayahuasca. Another traditional tobacco use is the use of singa, or tobacco liquid. Singa is often applied during initiations, crises, and rituals, where it can be snuffed, drunken, or spit over the body of a sick person with according chants. Moreover, singa has sedative or narcotic effects that help to induce a trance state, and in addition, to suck out evil spirits and illnesses in patients.

The shamans in the Ecuadorian Montañas drink tobacco juice to communicate with the spirit world and they inhale tobacco water to call the tobacco spirit and ask for help to treat illnesses and relieve hostile energies or supernatural forces. Tobacco shamans from the Campa, drink concentrated tobacco juice to communicate with and ask for support of spirits during ecstatic trance states. The tobacco drink allows the shaman to ease the suffering of sick people and of people that have been attacked by dark shamans or evil spirits. Moreover, tribes like the Jivaros use tobacco juice for several medicinal purposes, including the treatment of indisposition, chills, pulmonary problems, and snake bites.

Rustica tobacco such as Tabaco de Moi is several times stronger than our usual tobacco and should be used with caution. It can cause nausea, vomiting, trembling, increased heartrate, and mind-altering effects. Be careful when swallowing the juice, it is highly intoxicating when consumed in high doses!