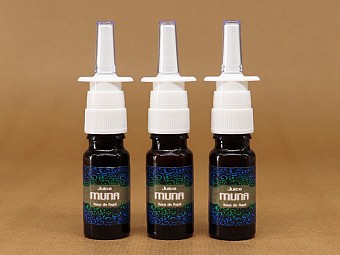 Rapé "Muña" nasal spray. The aroma of the Muña plant provides a refreshing experience. Apply one or two sprays in each nostril, while holding the sprayer almost horizontally. Slightly breathing in through the nose will enhance the entry into the sinuses. The strength and aroma of the juice and the gentle minty touch of the Muña is immediately recognised and comes on like a sensory explosion in the front of the head. Rapé juice has a strong effect on focus and presence, it provides powerful grounding and stops the chattering of the mind. The juice has a profound cleansing effect on the sinuses and it opens the heart and mind. Detailed information below.

Tabaco juice is a traditional medicine to the indigenous people and it is widely used through the continents by different shamans and healers. Traditionally it is inhaled through the nose from the palm of the hand.

We produce a new and potent liquid extract that is sprayed into the nose with a nasal sprayer. The production and application of the juice of Rapé and Tabaco is developed by us and we have fine tuned the method over many years. We are proud to present a variety of liquid Rapé and Tabaco nasal sprays to our customers.

Suco de Rapé Muna is a potent liquid extract. It is made by steeping a blend of 10 varieties of Rapé in a hydro-alcoholic solution for many months. Bio alcohol was used in the steeping and extraction phase to ensure stability of the infusion and to stop the natural fermentation process. Following the extraction, the juice is separated by extensive filtering and then slow vacuum evaporation of the solution reduces the liquid into a juicy 1:2 extract. The vacuum reduction involves no heat. Finally the solution is left to settle for 4 months to allow the finest plant particles residue to sink to the bottom, which is then discarded. The result is a high quality concentrated extract and so called "raw" product, that can effectively be used in a nasal sprayer. At the final stage essential oil of Muna (Mintostachis setosa) is added for a fresh and minty aroma. A small percentage of bio alcohol was added to ensure a limitless shelf life.

The extract ratio is a potent 1:2. This means that 1 kilo Rapé was used to produce 2 liter liquid extract.

Suco de Rapé Muna liquid extract comes in 11 ml amber glass bottles, with a nose-spray dispenser included. Also available are 22 ml refill bottles (without sprayer). Apply one or two sprays in each nostril, while holding the sprayer in an angle pointed to the centre of the head. Slightly breathing in through the nose will enhance the entry into the sinuses. It is important to treat each nostril, as both sides have separate properties: the left side is used for expelling negative energy and the right side is used for receiving good energies, balance, and health. Advised is to allow the fluids to go outward by blowing the nose, and that the remains are not swallowed but spit out. It is advised to keep the body upright and not lying down on the back after administering.

The effects are intense and a sudden streak of strong aroma enters the sinuses immediately upon application. This tool is perfect for grounding, and cleansing the channels before and after Rapé use.

Tabaco juice has a strong effect on focus and presence, it provides powerful grounding and stops the chattering of the mind. The juice has a profound cleansing effect on the sinuses and it opens the heart and mind. Find out how to make your own Rapé juice here.