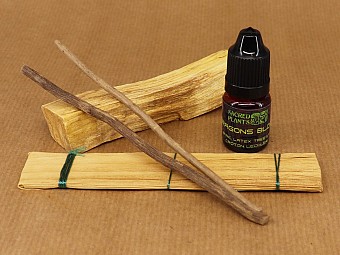 Kambo venom is collected on a small bamboo stick and dried. The stick is wrapped in corn leaf to protect its contents. When you unwrap a Kambo stick, its surface contains the dried secretions of the Phyllomedusa bicolor. As the sticks are all handmade by different tribesmen, each Kambo stick is unique, but should contain enough venom for approximately 75 "dots". Each Kambo stick comes with a set of wooden applicators, a stick of Palo Santo incense wood, and a dropper bottle of Dragons Blood latex. More information can be found below. 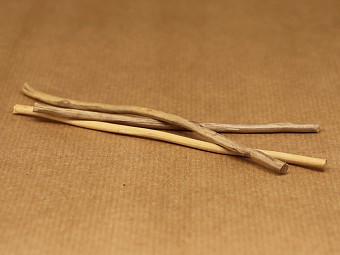 Our Kambo sticks come from our trusted source who is in close contact with the Matzes people, who harvest the venom from the frogs.  They hunt the frogs at night and extract the sap by stressing them but not hurting or killing them.

To stress them the Matzes tie the “feet and hands” and pull them gently to induce the secretion of the kambo from the back skin of the frog. They use male and female frogs. The venom is collected on a small bamboo stick and dried. The stick is wrapped in a sheet made of cornleaf to protect its contents. When you unwrap a Kambo stick, its surface contains the dried secretions of the Phyllomedusa bicolor. As the sticks are all handmade by different tribesmen, each Kambo stick is unique.

Each Kambo stick comes with a wooden stick to burn the holes in the skin, a sample bottle of Dragon's Blood resin, and a piece of Palo Santo incense wood.

"Kambo", "Kampo" or "Sapo" is a traditional medicine used by Amazonian tribes indigenous to the western Amazon region. The Matses tribe traditionally uses this medicine to obtain strenght, aim and dexterity for the hunting. The utilization of this frog venom is shared by numerous other Amazonian tribes, including the Matis, Kanamari, Kaxinawa, Katukina, Kulina, Yaminawa, Marubo, and Ticuna tribes.

The frog poison (Sapo) is coated upon the blow darts that are to be used for hunting in the forest. When the dart is blown into the body of the animal being hunted it is incapacitated through pysical discomfort and goes through a detox process similar to the process experienced by the shaman to cleanse themselves of bad luck and toxins. The animal is captured and returned to the village healthy and alive ready to be sacrificed to feed the tribe.

Because of its beneficial properties on the healing of wounds and preventing scar tissue, Sangre de Drago is an essential tool for a Kambo practitioner. Applied to the burns upon conclusion of the ceremony, Sangre de Drago protects the healing burn by covering it with an antibacterial layer. When dried up it completely closes the wound. Taspine is the active alkaloid responsible for the wound healing and antibacterial effect. A small bottle will be included with every Kambo stick.

The Panoan tribes that practice the poison frog ritual call it Kambo or Kampo in their language. Tree frogs are referred to as “sapos,” in spanish hence the term sapo as sometimes used to refer to the indigenous medicine, kambo. The tree frog is stretched by strings tied to its limbs. As painful as it may look, the tree frog is not harmed during the process in which the poison is harvested from its skin. Traditionally, older men scrape the epidermis of the frog with a wooden stick to remove the toxin. After harvesting the poison, the frog is released unharmed. To the Matses, harming the frog could offend animal spirits and resulting in severe misfortune.[1]

The tribal members use the poison as a medicine and hunting aid, claiming it makes them strong and invisible. The poison from the wooden stick is typically mixed with the shaman's saliva and applied to tiny burns.[2]

Sebastian, a Machineri Indian warns that their "healers know how to use the frog's secretion. Now, it is being used in other places incorrectly, and this has led to the death of patients."[3]

In the 1980s, during one of his visits to the Matses Indians in Peru, investigative journalist Peter Gorman documented the first first-hand experience of a human taking an animal substance directly into the blood stream for medicinal purposes. Times have changed since then. Throughout the Amazon, Sapo, can now be purchased, without prescription, in markets and apothecaries, or administered by traditional healers and herbalists as a natural household remedy. Not surprisingly, the global pharmaceutical industry is now taking keen interest in the medicinal properties of frog slime. In an International Herald Tribune article dated May 31, 2006, an alliance between the Katukina tribe and the Brazilian government aims ensure that profits generated from the development of drugs from the Phyllomedusa bicolor's secretions, will stay in the country and benefit the Katukinas.[4]

...or rather Animal Info:

Phyllomedusa bicolor, also known as the Giant Leaf Frog or the Giant Monkey Frog, is a large green noctural frog that lives in the trees of the Peruvian and Brazilian Amazon. Males 91-103 mm, females 111-119 mm. The dorsum is dark green and the belly varies from white to yellow-white or cream. There are sparse white spots with dark frames on the lower lips, chest and front legs, and these are more dense on the flanks and hind legs. Fingers are transparent brown with large green adhesive discs. A prominent gland extends from behind the eye over the tympanum. The iris is dark gray. The species is arboreal and nocturnal. Males usually call from high trees, and descend with the female to construct nests 1-3 meters above ponds. Reproduction occurs throughout the year in ponds near to, or far from, streams, with a peak from November to May (rainy season). The females deposit about 600 unpigmented eggs in a gelatinous mass in leaf nests hanging over ponds. The leaves are joined or folded with the aid of the male. After 8-10 days, the tadpoles hatch and fall into the water, where they complete development until metamorphosis. Like other amphibians from around the world, the giant monkey frog is threatened by climate change and habitat loss.[5]

Phyllomedusin is a new peptide of the tachykinin family. Phyllomedusin strongly affects the salivary glands, tear ducts, intestines, and bowels, and contributes to violent purging. Tachykinins are active peptides which excite neurons, evoke behavioral responses. They are potent vasodilators and secretagogues, and Phyllomedusin contract (directly or indirectly) many smooth muscles. Phyllomedusin is secreted protein and expressed by the skin glands.

Nu-Nu a traditional hunting powder and powerful snuff is used alongside and during Kambo ceremonies in the Amazon by many tribes including the Matses. It contains a sacred mix of powerful jungle herbs. Also used today by modern Neo Shamans it is now becoming popular throughout the world. Guayusa (Ilex Guayusa) is made into a stimulating tea and drank by the Matses during Nu-Nu and Kambo ceremonies to keep energised and awake during long nights in ceremonial practise. Palo Santo (Bursera graveolens) a powerful incense wood, has been and is now increasingly wideliy used in Kambo treatments, to help expel negative energies and toxins from the body by waving the smoke directly under the face of the patient while under the influence of the Kambo venom.

NEVER use kambo without first being introduced and initiated by an experienced Kambo treatment provider, or an experienced user. And do proper research. Most importantly: drink 1 to 1.5 iters of water 10 minuttes prior and during apllication of the venom.

Katukina has no intention of popularizing or promoting the use of Kambo. We provide this shamanic tool for those who know how to prepare it, know about and respect its inherent power. We provide basic historical information in our descriptions, with minimal detail about usage, effects or experiences.

Providing usage instructions on this product is something beyond our ethics and responsibility. It is in our opinion impossible and unethical to define its use with a thousand words. It is too complex. The many excellent links that we provide will certainly encourage those interested in doing their own research, to learn about all the aspects on the subject. Follow the links provided in the "references" tab.