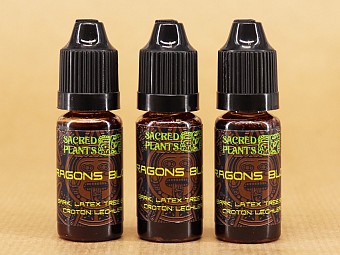 Extra thick and concentrated liquid resin (latex) obtained from the Croton lechleri tree. Because of its beneficial properties on the healing of wounds and preventing scar tissue, Sangre de Drago is an essential tool for a Kambo practitioner. Applied to the burns upon conclusion of the ceremony, Sangre de Drago protects the healing burn by covering it with an antibacterial layer. When dried up it completely closes the wound. Taspine is the active alkaloid responsible for the wound healing and antibacterial effect. More information below.

Prices below have been reduced by 5% for a limited time. 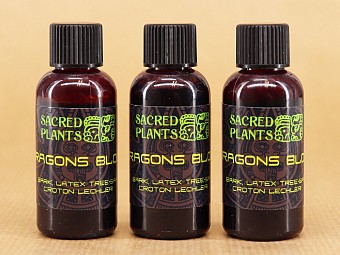 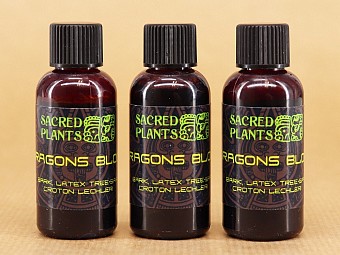 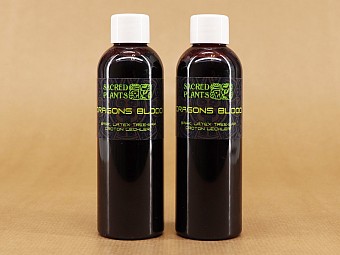 Extra thick and concentrated Dragon's Blood latex. Sangre de Drago is an essential tool for a Kambo practitioner. Applied to the burns upon conclusion of the ceremony, Sangre de Drago protects the healing burn by covering it with an antibacterial layer. When dried up it completely closes the wound. Taspine is the active alkaloid responsible for the wound healing and antibacterial effect.

Our suppliers of this wonderful product work strictly according to the "Forest Management Plan", by replanting new trees once the tree-sap has been harvested. The only method of obtaining this sap is by killing the tree. Therefore we offer only limited quantities of this highly praised Dragons Blood latex. Harvested from the Croton lechleri tree around the Maranon River in the Peruvian Amazon.

Sangre de Drago's red sap or latex (and also its bark) has a long history of indigenous use in the rainforest and in South America. The earliest written reference dates its use to the 1600s, when Spanish naturalist and explorer P. Bernabe Cobo found that the curative power of the sap was widely known throughout the indigenous tribes of Mexico, Peru, and Ecuador. Sangre de Drago is used extensively by indigenous cultures of the Amazon River basin for its remarkable healing properties.[1]  "The results of in vitro and in vivo studies largely support the majority of ethnomedical uses of Sangre de Drago..."[2]

Sangre de Grado belong to the Euphorbiaceae (Spurge family) and is a medium-sized to large tree that grows from 10-20 meters high in the upper Amazon region of Peru, Ecuador, and Colombia. Although tall, the trunk is usually less than 30 cm in diameter and is covered by smooth, mottled bark. It has large, heart-shaped, bright-green leaves and unique, greenish-white flowers on long stalks. When the trunk of the tree is cut or wounded, a dark red, sappy resin oozes out as if the tree is bleeding, earning this local name. The genus Croton is a large one, with 750 species of trees and shrubs distributed across the tropical and subtropical regions of both hemispheres. Crotons are rich in active alkaloids, and several species are well-known medicinal plants used as purgatives and tonics.

Virile, wood scent. Usually added to incense formulas or perfumes for its magical powers. Used in incense preparations to cleanse a space of negative entities or influences.