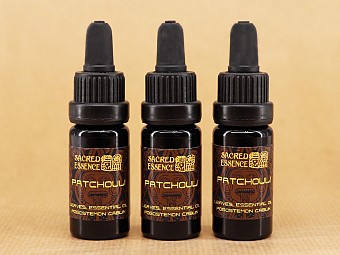 Patchouli is a bushy herb of the Mint family. The plant is native to tropical regions of Asia. The scent of Patchouli is heavy and strong. It has been used for centuries in perfumes and continues to be so today. This batch comes from an old private collection and is aged, intense and deeply aromatic. Very rare and limited stock. More information can be found below.

Patchouli (also Patchouly or Pachouli) is a bushy herb of the Lamiaceae (Mint family). The plant is native to tropical regions of Asia. The scent of Patchouli is heavy and strong. It has been used for centuries in perfumes and continues to be so today. Sachets are made of the coarsely-powdered leaves, and before its common use in Europe, genuine Indian shawls and Indian ink were distinguished by the odour, which has the unusual quality of improving with age. It became popular among devotees of the free love and hippie lifestyles, since the pungent smell of Patchouli is alleged to cover the smell of burnt Cannabis and body odor. Patchouli also has a reputation as an aphrodisiac, a notion that probably originated in India, where it is used as an anointing oil in Tantric sexual practices.

During the 18th and 19th century silk traders from China travelling to the Middle East packed their silk cloth with dried Patchouli leaves to prevent moths from laying their eggs on the cloth. Many historians speculate that this association with opulent eastern goods is why Patchouli was considered by Europeans of that era to be a luxurious scent. This trend has continued to the present day in modern perfumery.

Patchouli oil and incense underwent a surge in popularity in the 1960s and 1970s, mostly among devotees of the free love and hippie lifestyles, due in part to the fact that the pungent smell of Patchouli is known to cover the smell of burnt Cannabis. During the Vietnam war, American soldiers used Patchouli to mask the smell of the graves of enemy soldiers killed in combat. War protesters of the time used Patchouli on themselves, to demonstrate that "We are all one race, we are the same as the enemy soldiers". Also, the Hare Krishna movement may have been partly responsible for this surge, as the god Krishna is said to "inhabit" Patchouli.

Patchouli is a tropical member of the Lamiaceae (Mint family), grown in the East and West Indies. The Patchouli plant is a bushy herb reaching two or three feet in height. The plant grows well in southern climates. It enjoys hot weather but not direct sunlight. If the plant withers due to lack of watering it will recover well and quickly once it has been watered. The seed-bearing purple-tinged white flowers are very fragrant and bloom in late fall. The tiny seeds may be harvested for planting, but they are very delicate and easily crushed. Cuttings from the motherplant can also be rooted in water to produce further plants. Leaves are harvested several times a year, dried, and exported for distillation of the oil, although the highest quality oil is usually produced from fresh leaves, distilled close to the plantation.

The scent of Patchouli is heavy and strong. A rich Musky-sweet, strong spicy and herbaceous smell. Perfume-note: Base.

The fragrance of Patchouli has a grounding and balancing effect on the emotions and banishes lethargy, while sharpening the wits. Helpful with depression and anxiety. It is also said to create an amorous atmosphere.

Patchouli balances and stimulates the Yin meridians of the body. Also balancing to the base and spleen Chakra and all conditions associated with them. Aligns the lower two Chakras with the heart center, stimulating greater energy for life. The scent calms emotions and strife and can be used to ease argumentative conditions and environments. Known as an aphrodisiac, partly due to its affect on the feminine energies within the body. Also good for easing melancholy and problems with overeating. Influences particular to sex, physical energy, and money.