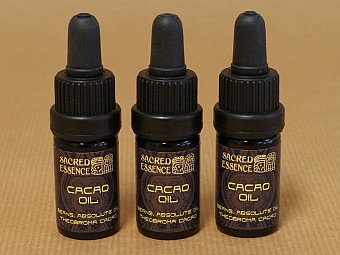 Cacao absolute oil derived from the bean of the Theobroma cacao tree. It can be added to bath and body products for an intense chocolate aroma! To produce this absolute, a solvent is used. Although the absolute may contain therapeutic properties, it is not a true essential oil. This oil has been purified several times to make sure there is no oxydation process active, and that all impurities, water or oxygen are removed. This ensures a long shelf life and lasting aroma. Shake before use. Not suitable for consumption.

This cacao absolute oil is derived from the cacao bean of the Theobroma cacao tree. It can be added to bath and body products if you want an intense chocolate aroma! There are actually two types of cacao (oils) used in bath and body products – the absolute and the essential oil. The pure absolute is extracted from the cacao beans. The essential oil is extracted by CO² – a newer method than that of traditional distillation.

In the case of absolutes, a solvent is used to extract the oil. Although the absolute may contain some therapeutic properties, it is not a true “essential oil.”

This oil has been purified several times to make sure there is no oxydation process active, and that all impurities, water or oxygen are removed. This ensures a long shelf life and lasting aroma.