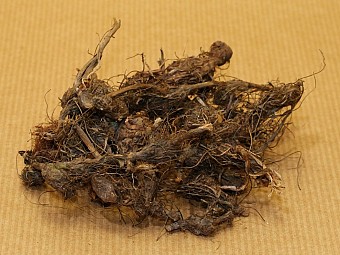 Piri Piri is a very important plant in the education of a curandero among the Yagua Indians of the Peruvian Amazon. They call it "Hiseñu" or "Ivenkiki". Among them it is the very first plant that the curanderos apprentice absorbs (rasped bulbs decoction). The second time, he takes Piri Piri and Tobacco juice. The third time, he takes Piri Piri, Tobacco juice and Ayahuasca (Banisteriopsis caapi). It is a visionary and teacher plant.

Held in high esteem by many tribes of the Amazon, the Machiguenga use the Piri Piri root as an aid in hunting.

"He takes a few quiet steps and doubles over a few spindly understory palms that obstruct his view, never taking his eyes off the monkey far overhead. He again takes up his stance, and this time removes a small cluster of sedge (Cyperus) bulbs from a net bag slung across his back. He snaps off one piece and chews the bitter, aromatic quid.

He rubs the chewed root onto his bow and arrow shaft, and then spits a fine, turpentine-smelling spray upward as he watches the monkey. 'Straight up, straight to the heart, no branches, fly straight and fast,' he mumbles to the bow, to the arrow, to the monkey, to himself. The muscles across his back stand out in relief for a moment as he draws and aims the taut bow... He releases the arrow with a soft grunt and a snap of the string. The arrow whizzes through the air and hits its target square in the chest."

The indigenous Indian tribes of the Amazon region ascribe magical properties to Piri Piri. The tall stems and/or the rhizomes are dried and powdered, or are prepared as a tea and used as a good luck charm or a love potion (called a "Pusanga"). Women will cultivate the plant and bathe their children with it to prevent sickness and injury, and give it to their husbands to bring good luck in hunting and fishing. Piri Piri is also well used as a medicine by the indigenous people and the rhizome is the part of the plant which is used.(1)

Mateo Arevalo (a Shipibo practitioner of traditional medicine): "Every grandmother, like a baptism, puts Piri Piri plant seed drops in a girls eyes when she is born. This transmits the designs she will make her whole life."(2)

Piri Piri is a type of reed-like tropical grass called a "sedge-grass." It can attain the height of 6 feet and grows in damp, marshy and flooded areas along the rivers and streams (where it can help control soil erosion) in the Amazon basin. It grows in clumps from dividing rhizomes which are about 2 cm long and 1.5 cm in diameter. The tall green stems are fibrous, round, and hollow and can be up to 3/4 in. wide at the base. Piri Piri stems have sometimes been used like reeds in basket-making and other crafts by the locals in the Amazon. It produces small, white, wheat-like flowers at the very top of its long stems. Although native to the Amazon, Piri Piri can be found in many other tropical areas and countries, including the southern United States, Africa, Asia, Australia, and across the South American continent. It can be found growing alongside the Nile River in Africa just as it grows alongside the Amazon River in South America. (1)

Piri Piri gives help for close exploration of the Earth's surface, reveals the nature of magical darts, teaches the way to destroy them by projecting them on the ground, and teaches healing techniques owing to magical pastilles (given to the apprentice which he swallows).

It can take many forms, such as a fire, candle, worm (the worm living in the bulb), snake, bird, jaguar, tapir, or deer personage. Black-brown colored, with a slow speed.

"Shipibo's women drop some sap of the root of Piri Piri on their eyes and see visions which are the motifs of their handicrafts."(2) Mateo Arevalo (a Shipibo practitioner of traditional medicine): "Every grandmother, like a baptism, puts Piri Piri plant seed drops in a girls eyes when she is born. This transmits the designs she will make her whole life."(5)

"The men cultivate special sedges to improve their hunting skill"(4)

"Fifty-five of the 700 species belonging to the genus Cyperus in Peru are known in the jungle as piri-piri. They are used in the treatment of snakebites; the bulb of the plant is chewed, the sap swallowed, and the remaining material is applied directly to the bite and the area around it."(3)

(2) In Her Hands, Craftswomen changing the world, by Paola Gianturco and Toby Tuttle.

(3) Shipibo's Art and the Plants of Spirits, Virtual Museum of Anthropology, Hiruwaka Institute.