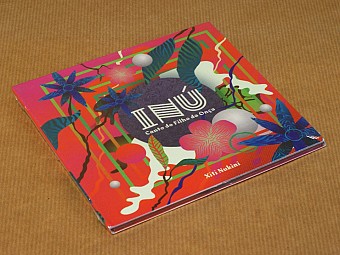 Ancient medicine music from deep in the jungle. Composed of studio recordings by the talented Xití Nukini. Xití Nukini is a young leader of the Nukini, master Rapé crafter and holder of ceremony. These unique and powerful songs are uplifting and create a connection to the present. More information can be found below.

Songs of the son of the Jaguar is the literal translation of the name of this wonderful CD sung and played by Xiti Nukini. As a young leader of the Nukini, Xiti is a defender of his people and their culture. He is an artist of life, he makes a wonderful Rapé, sings his songs in ceremony, takes care of his family, a child of the forest. This CD has mostly songs that are his compositions, many are in their language, some in Portuguese and a few are traditional songs of his people. Like most tribes of the region the Nukini are in a deep process of reestablishing their culture, studying their language and songs and practicing their ceremonies. Xiti is probably the most articulated person from his people in this whole movement. Released under the label Zoorecords in May 2017. Full colour sleeve with amazing cover art designed by the talented Ccccchaves.