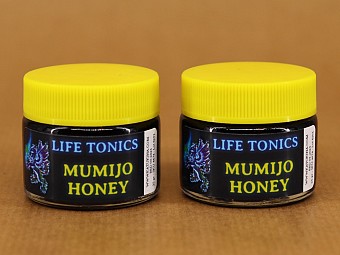 A truly magical gem - a magnificent blend of Mumijo and high quality honey. Containing between 70 to 80 ionic vitamins and minerals, it is easily assimilated and aids the mitochondria to oxygenate more efficiently, which helps to remove toxins and reduce inflammation while accentuating the healing process. Blended 50-50 with Spanish honey. Pure Mumijo can be found in our shop here.

A truly magical gem - a magnificent blend of mumijo and high quality honey.
Mumijo - Conquer of mountains and destroyer of weakness. Mumijo has been used in the East for more than a five thousand years. Known as the Tears of the Mountain, it is a living mineral, squeezed from the rocks under tonnes of pressure and then dried by the sun. It is actually the ancient remains of diverse bio systems trapped in the rock formations and fermented over millennia. Finally in the heat of the sun it oozes out as a black tar, rich in ionic minerals and fulvic acids. Truly a gift of nature, its power was soon recognised by the ancients of the East for its extensive health benefits. It was eventually called the Balm of Life, a title it is more than worthy of.

Mumijo is a blackish-brown powder or an exudate from high mountain rocks. It is a natural substance from organic and plant compounds that have been compressed by layers of rock formed for centuries by the gradual decomposition of plants by the action of microorganisms and subjected to high temperature, pressure, and time, the compounds morph into Mumijo. Mumijo is commonly used in ayurvedic healing. It’s an effective and safe supplement that can have a positive effect on the overall health and well-being. Modern science has supported that premise by identifying fulvic and humic acids, which are found in abundance in Mumijo. It activates mineral metabolism, under it increases calcium, potassium and phosphorus in blood - important building materials that make up bone.

You can find detailed description of the usage of Mumijo here.

Our Mumijo is collected from the Siberian high mountains. After collecting it is purified by cold water extraction and extensive filtering to remove any presence of heavy metals. The result is a purified resin with a 100% solubility in water, and with high levels of fulvic and humic acids. Crude Mumijo is generally called Shilajit and comes from India. This is usually not the highest quality and contains a lot of course residue and impurities.

First brought to the west in the 1900's by the Russian elites for its powerful rejuvenating properties. Its use spread rapidly among the aristocracy. So convinced were they of its amazing restorative powers, it later went on to be used by the Russian olympic team and the cosmonauts in the space program. A supreme adaptogen in a highly bioactive form, it is easily assimilated, elevating vitality and concentration. It also can provides protection from radiation damage.

Over the years science has uncovered many more benefits that Mumijo has to offer. Mumijo has the answer to an array of modern life's health issues. Containing between 70 to 80 ionic vitamins and minerals, it is easily assimilated and aids the mitochondria to oxygenate more efficiently and induce apoptosis. This in turn helps destroy bad cells, remove toxins and reduce inflammation while accentuating the healing process. From the chemical point of view Mumijo is a natural mix of organic and inorganic matter.It consists of 26 micro elements, 10 metallic oxides, 6 amino-acids, steroids, phospholipids, range of vitamins, ethereal oils and other biologically active substances. In spiritual practises, it aids meditation and can induce deep relaxation. It can also act as a delivery system to assimilate other substances into the body, Q10 for example which is greatly enhanced when combined with Mumijo.

WildLeif Mumijo is harvested in the pristine Altai mountains of Siberia, where it is purified over a three month period to provide the highest quality and potency. It is substance that can benefit all ages and once experienced will become a habit that will enhance and extend life.

Blended 50-50 with Spanish medicinal honey, which has been harvested from a remote place in Spain where there is no industry for miles around.

Mumijo references are older than three thousand years. Mumijo was not known only in Babylon, Persia, Egypt, but also in Greece, Rome and certainly in Asia. The word Mumio itself (sometimes written as Mumjo, Mumio, Mumyo) has its word root probably from Greek language meaning "body preserving".

Mumijo was used by the Sumerians and written about in the ancient Indian Vedas. It is present in writings such as Susruta-Samhita, Ccaraka-samita, the Chinese book of difficult problems. Knowledge about Mumijo and its applications were kept secret, and were handed over in families of high ranked doctors only by word of mouth from father to son.

Mumijo is mentioned in works of great men such as Aristotle, who researched its effects on people and recorded various applications, and in works of his student Alexander the Great.

First brought to the west in the 1900’s by the Russian elites for its powerful rejuvenating properties. Its use spread rapidly among the aristocracy. So convinced were they of its amazing restorative powers, it later went on to be used by the Russian olympic team and the cosmonauts in the space program. A supreme adaptogen in a highly bioactive form, it is easily assimilated, elevating vitality and concentration. It also can provides protection from radiation damage. Just what is needed for a trip into space.

Over the years science has uncovered many more benefits Mumijo has to offer.

Mumijo should be taken on an empty stomach in dry or dissolved form, with water, tea or milk. The dosage depends on the age and general condition of the patient. The recommended quantity per day: Adults: 0.2-0.6 gr. Children (6-12): 0,1-0.3 gr. Children (under 6): 0.05-0.15 gr. In most recipes the recommended dayly dose is 0.2g. Separate 0.2 gram of Mumijo with clean hands and roll it into a ball with a diameter of about 6 mm, the size of a black pepper pea. After 10 days of treatment take a 5 day break, and then conducted a second course of treatment. Mumijo is non-toxic and has no contraindications.