Piri Piri
Piri Piri, or Cyperus articulatus L. is a tropical sedge that grows along the Amazonian rivers and belongs to the Cyperaceae family. This powerful shamanic tool is used for various medicinal purposes ranging from the treatment of epilepsy to the treatment of snake bites and fevers. The use of Piri Piri as eye drops to increase visualization and aiming of the mind, is probably the most remarkable application of this plant. We obtained this sacred medicine directly from a Shipibo elder who lives in Pucallpa, Peru. A friend of us stayed with her and was allowed to watch the preparation of Piri Piri, or as they call it in Shipibo totimawaste or waste/huaste (Jauregui et al. 2011; et al.1996). He was taught from this wise elder that there are about 500 different ways and recipes to make Piri Piri or totimawaste. She made two varieties for us, which are based on an old Shipibo recipe. 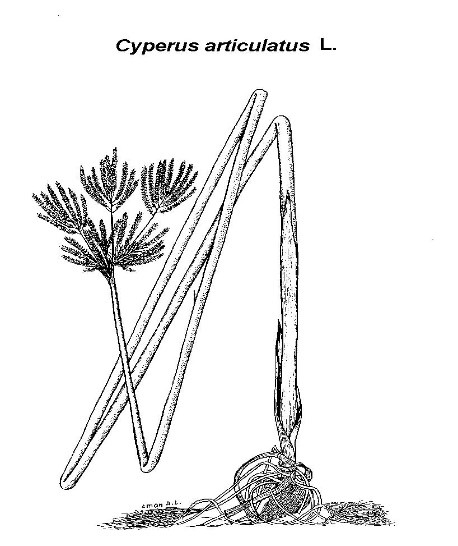 Usage
Like Sananga, Piri Piri is used by indigenous tribes in Peru to enhance their hunting skills. The tribes also apply the drops to dogs, either in their eyes or mouth, in order to increase their smell and make them become good hunters (Bennett et al. 2015). Yet, like Sananga, Piri Piri is an all-purpose remedy that has broad applications. The Shipibo tribe knows about 21 medicinal and magical applications of Piri Piri (Tournon et al. 1986). Its main traditional uses were to ameliorate nausea and vomiting, to relieve intestinal and digestive problems, and to sedate and tranquilize. However, there are many scientific evidences showing that Piri Piri qualifies as a tranquilizer (Bum et al. 2004), antioxidant (Desmarchelier et al. 1997), antibacterial (Mongelli et al. 1995), anti-candida (Duarte et al. 2005), antimalarial (Khamsam et al. 2011), relaxant, analgesic (Rakotonirina et al. 2001), insecticide, antivenin (Hurtado 2009), anticonvulsant and anti-epileptic (Bum et al. 2004 and 2003 and 2001), and as a remedy against headaches, flues, coughs, and diarrhea (Hurtado 2009). In addition, Piri Piri was used widely in the Shipibo tribe as a contraceptive, for abortions and to avoid the pain of childbirth (Hern 1976; Waisbard 1958), probably due to its ergot alkaloid content.

Piri Piri can be applied into the eyes, yet there are many ways of employing this sacrament: when used to counteract malaria, it is applied by nasal infusion. When utilized for wounds, it is chopped and applied externally. For digestive problems or nausea it is applied as a tincture. For coughs and fevers it is drunken, and for the use as an antivenin it is applied orally by decoction. The flowers and leaves are used to make a tea that has strong aphrodisiac effects and, in addition, increases (lucid) dreaming and tranquilizes. When the dried rhizomes are blended with tobacco and smoked, they are reported to produce hallucinogenic effects.

Kanawasta
In Shipibo this word means 'focusing better'. The Piri Piri drops are used to improve the ability to focus in crafts like sewing, painting, embroidery and producing artisan ceramics - which is carried out by the women of the tribe. The Shipibo are famous for their embroidery and textile painting. From a young age, the Shipibo females are initiated by their mothers and grandmothers into this practice. A Shipiba tells: "When I was a young girl, my mother squeezed drops of the Piri Piri into my eyes so that I would have the vision for the designs of my paintings”.

Wekunwarti
In Shipibo this word can be translated as 'for better vision'. The Piri Piri drops are used before and during Ayahuasca ceremonies (Chaumeil 1982), and are told to open up the participant to the world of visions, and to improve his ability to 'see' things on his journey to the otherworld. After the use of the eye drops, visions get more clear and detailed. Shipibo members also say the eye drops are 'for looking far' - enabling an improved ability to foresee upcoming events and intentions.

Active ingredients
Piri Piri contains several different biologically active alkaloids, including flavonoids, polyphenols, saponins, tannins, and terpenes, yet its biological actions are mainly ascribed to cyperones, which are thought to show antimalarial and pro-oxidant effects (Kiuchi et al. 1983; Weenen et al. 1990; Zoghbi et al. 2006). Moreover, studies have shown that Piri Piri reeds are infected by a fungus, which by itself contains a vast amount of ergot alkaloids, about 110-224 mg/L (Plowman et al. 1990). The full spectrum of effects and bioactive ingredients contained in this sacred plant is still not completely understood. Furthermore, as the plant does not reproduce by seeds but by vegetation along with the fungus, many different subspecies of Piri Piri exist with divergent fungi and alkaloid composition (Plowman et al. 1990).

Origin and Preparation
Piri Piri is a native Amazonian marshland plant, yet it grows in many other tropical areas, including Africa and Asia. There are around 499 botanically identifiable species of the Cyperaceae family (Simpson 2008), and about 30 different types of Piri Piri, that belong to only three species: Eleutherine bulbosa, Cyperus articulatus and Cyperus prolixus Kunth (Jauregui et al. 2011; Tournon et al. 1986). Thus, there many kinds of Piri Piri that are used by shamans, each with its own specific use and spirit.
Piri Piri is used on his own, but it is also known as additive to tobacco- and Ayahuasca-drinks. Shamans recognized this sacred plant for hundreds of years as an important teacher plant, however, Piri Piri has also been introduced into Western medicinal practices: already at the beginning of the 20th century, North Americans used Piri Piri extracted fluids, sold as a drug called ‘Adrue’, as herbal remedy for stomach and intestinal aches. The same drug, Adrue, was used in higher doses as a sedative for anxious or nervous patients that were in turn enjoying its dream-like and euphoric side effects.
For most recipes the rhizomes or stems are dried and pulverized and then prepared as a tea, bath, or eye drops. Yet, every tribe has its own way of using this magical plant, the Shipibo tribe, for example, grinds up the fresh rhizomes and extracts the juice to make the eye drops. Another recipe of the Shipibo consists of stamping the fresh root in a cotton ball and squeezing its juice in a cup of hot water (Hern 1972); this drink is then given to women on their first menstruation day to prevent conception and menstruation.

Application and Dose
Before thinking about the dose, you should read carefully our thoughts on the power of your intention: every medicine can only achieve and cure what you are intending.

Only 1-2 drops per eye are sufficient for a powerful Piri Piri session. We recommend to find a calm and quiet place, either in nature, or at home in a peaceful setting and with meditative music. Use it preferably in the evening, so your eyes can rest. Make sure you lie down to enable a good application and leave your eyes closed during the session. To begin, you should hold your eye open and carefully drop 1-2 drops of the liquid into the wide open eye. It is not painful and feels refreshing. It is important to apply one drop to both eyes, and do not wait with the second drop, apply it immediately to balance out the energies on both eyes. Thereafter, you should blink with your eyelids for a short while to distribute the liquid over the whole eye. On the next morning, your eyes may feel a little sensitive and dry. Wash your eyes and face with cold water and it will pass soon. This is part of the cleansing process that takes place during the night.

I have applied the drops myself one time, and interestingly my vision not only improved the next day, I could literally "see" things better. I noticed my improved vision, while being in conversation with others, and while thinking. My mind's focal point and view to understanding were greatly enhanced.

Cautions
Contact lenses should be removed before applying Piri Piri.

References
Bennett BC, Alarcón R (2015). Hunting and hallucinogens: The use psychoactive and other plants to improve the hunting ability of dogs. Journal of Ethnopharmacology; Available online 28 May 2015 In Press.

Desmarchelier C, Gurni A, Ciccia G, Giulietti AM (1996). Ritual and medicinal plants of the Ese’ejas of the Amazonian rainforest (Madre de Dios, Perú) Journal of Ethnopharmacology; 52: 41–51

Hern WM (1972). Knowledge and Use of Herbal Contraceptives in a Peruvian Amazon Village. Human Organization; 35(1): 9-19
Hurtado DF (2009).Use of medicinal plants in the Peruvian Amazon. Doctoral thesis at the Florida International University.

Zoghbi MGB et al. (2006). Yield and Chemical Composition of the Essential Oil of the Stems and Rhizomes of Cyperus articulatus L. Cultivated in the State of Pará, Brazil. Journal of Essential Oil Research; 18(1)