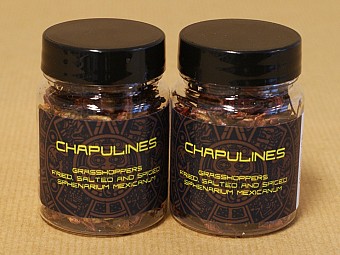 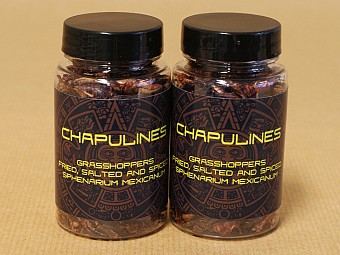 Chapulines are grasshoppers of the Sphenarium genus in the family Pyrgomorphidae, native to Mexico (1).  However various species are caught and eaten as "Chapulines". Chapulines are a popular snack and food source in Mexico and reports dating back to the Spanish conquistadors in the 16th century mention the eating of grasshoppers (2) though humans have been eating insects (entomophagy) in many parts of the world dating back to prehistoric times. Today Chapulines are a popular food source in Oaxaca, Mexico city, Tepoztlan, Cuernavaca and Puebla (3) where they are fried or roasted, salted and spiced, often lime juice is added and eaten either as a snack or used as a filling.

Their nutritional content is quite impressive. Chapulines are rich in nutrients such as high-quality protein, fiber, calcium, zinc and iron, yet low in sugar and fat. The fat it does contain provides more of the essential omega 3 fatty acids EPA and DHA than beef from grass-fed cows (Sources: FAO 2013 and Raubenheimer & Rothman 2013)(5).  Sphenarium mexicanum specifically has been shown to contain as much 62.1g of protein, 10.8g of fat 4.06g of crude fibre and 22.64g of carbohydrate per 100g dried(6).

Grasshoppers tend to be harvested in the fields of Oaxaca either early morning or late afternoon. While more sophisticated operations call for the use of nets, small-scale family collecting is usually done by swooping a wicker or synthetic basket over the fields of green. Early in the season they are gathered from areas where herbs and grasses grow, then later or once the little critters have grown a bit bigger they are found nourishing themselves around crops such as corn and squash. Commercial production often uses alfalfa as a feeding ground for chapulines (4). They are collected only at certain times of year (from their hatching in early May through the late summer/early autumn). After being thoroughly cleaned and washed, they are toasted on a comal (broad flat cookware) with garlic, lime juice and salt containing extract of agave worms, lending a sour-spicy-salty taste to the finished product (3).