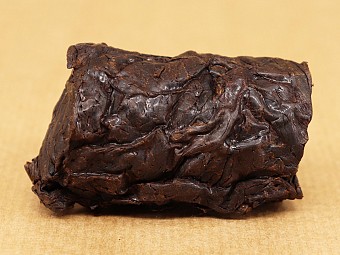 The rare and famous Louisiana Tabaco is known for its dark, black colour and unique flavour. Often considered the truffle of pipe Tabaco by connoisseurs, Perique gets its distinctive flavour from barrel fermentation, a technique dating back to the 18th century. Packed as mini rolls of compressed vacuum sealed leaves, the perique may continue the fermentation process. Perique can be a perfect and unique ingredient to create ones own Rapé blends, or to blend into an existing Rapé to give it a more deepening and grounding effect. Note that when Perique is used to create a Rapé, or when blended into a Rapé, be very moderate in the amount, because its strength can cause dizziness and disorientation. More information below.

Each of the packs weigh approximately 50 gr.

The rare and famous Louisiana Tabaco is known for its dark, black colour and unique flavour when cured. Perique is a spice Tabaco, usually used in Virginia blends. It has a dark, oily and almost wet appearance when cured, with a taste of pepper and figs. The fruity aroma is the result of hundreds of volatile compounds created by anaerobic fermentation of the Tabaco. Often considered the truffle of pipe Tabaco by connoisseurs, Perique is used as a component of various blended pipe Tabacos, as many people consider it too strong to be smoked pure. Being acidic, it tends to alleviate alkaline tongue bite, which is so often a problem with Virginia Tabaco, so it is recommended to blend this with your other Tabacos before use.

The St. James Perique originated and is grown in the St. James Parish of Louisiana in the USA. Perique gets its distinctive flavour from barrel fermentation, a technique Louisiana settlers are thought to have picked up in the 18th century from the local Choctaws. Once the leaves have partially dried, they are moistened with water and stemmed by hand. The leaves are then rolled into "torquettes"; packed into hickory whiskey barrels. The Tabaco is kept under pressure using oak blocks and massive screw jacks, forcing nearly all the air out of the still-moist leaves. Once a month the pressure is released, and each of the torquettes is worked by hand to permit a little air back into the Tabaco. After a year of this treatment, the Perique is ready for consumption, although it may be kept fresh under pressure for many years. Extended exposure to air degrades the particular character of Perique. 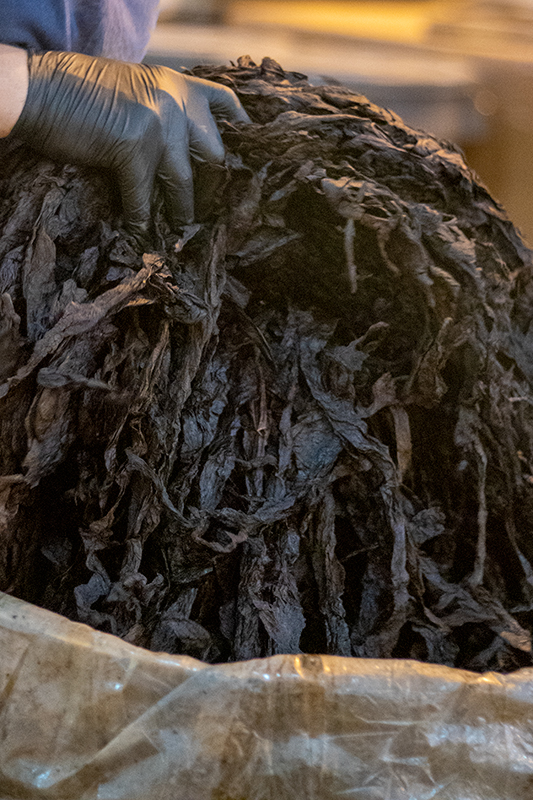 Packed as mini rolls of compressed vacuum sealed leaves, the perique may continue the fermentation process. Each of the packs weigh approximately 50 grams.

Perique can be a perfect and unique ingredient to create ones own Rapé blends, or to blend into an existing Rapé to give it a more deepening and grounding effect. Note that when Perique is used to create a Rapé, or when blended into a Rapé, be very moderate in the amount, because its strength can cause dizziness and disorientation. This effect comes a few minutes after application and can be overwhelming and in some cases nauseating.

The origins of Perique reach back to the 18th century when French settlers from Canada observed the Chickasaw and Choctaw of Louisiana pressing Tabaco in hollowed-out logs and placing heavy rocks on top. The resulting pressure caused the Tabaco to release its natural juices and the Tabaco was allowed to soak in those juices and ferment. In the early 19th century, a farmer named Pierre Chenet (some sources spell it as Chemot), became the first to grow that type of Tabaco commercially. Chenet continued to study the process, refined the methods used and it soon became a popular type of Tabaco, becoming widely known as Perique, reportedly after Pierre's nickname.[2]

The Perique leaves are very humid. The leaves were compacted and compressed into a small cylindrical wrap and then vacuum-sealed, This will maintain the fermentation process and keeps it fresh and preserved during storage and transport. Upon receiving you can keep it in the vacuum state for many months. When opened, unpack the section and store it in paper wrapping. When the outside becomes brittle over time you can simply spray the outside with distilled water, thereby the material will slowly absorb the water and the outside layer will become fresh again. Then pack the humidified Tabaco in a plastic bag for a day or two, maximum. Then it needs to be wrapped in dry paper again.

Note: This can not be stored in a (non vacuum) plastic bag, as this may cause to form mould. Store it in paper instead, below room temperature.

One thing that sets Perique apart from other Tabacos is that it's both a type of Tabaco and a process. "What makes Perique the unique product that we enjoy in our blends is the process it goes through," says Jeremy Reeves, head blender at Cornell & Diehl.

The crops are initially planted in greenhouses during late winter and are transplanted into the fields in the spring. During the summer, the plants are stalk-cut harvested and air-cured, initially resulting in Tabaco that closely resembles Burley but will undergo a unique fermentation process that makes it such a distinctive type of Tabaco. After air-curing, the leaves are picked from the stalks and heavily wetted to prepare it for the next step.

The wetting is far beyond introducing just enough moisture to make the leaf pliable," Reeves explains. "For Perique, the leaves are extremely wet, quickly hand-stripped from their midribs, and twisted into bundles that will then go into a charred oak barrel."

The bundles are placed into ex-bourbon barrels, marking the beginning of Perique's lengthy fermentation process. "The barrel doesn't have bourbon in it, but it still has all of the yeast and microbial action that's taking place in the wood, which aids in fermentation," Jeremy says. The stripped leaves are rolled into bunches weighing approximately a pound and are packed into the barrel, which will weigh around 500 pounds once completely packed. The leaves are first placed along the barrel's outside edge, gradually adding leaves in layers and working inward toward the center of the barrel. "The goal is to reduce air pockets as much as humanly possible," Jeremy explains, "because air pockets won't allow for proper fermentation and you'll have rotten Tabaco."

After the barrel is uniformly packed and sealed, a wooden block is placed on top of the barrel's lid and is put under a screw jack that exerts around 25 to 30 tons of pressure on the barrel. This enormous amount of pressure not only initiates Perique's fermentation process, but forces out any excess air that exists within the barrel or small air pockets in the bundled leaves.

The Tabaco sits under immense pressure for 90 days, after which the pressure is taken off and the bundled leaves are individually taken out of the barrel. The bundled leaves are carefully unfurled and reintroduced to oxygen by being left out for 12 to 24 hours before being placed back into the barrel and put under pressure again. "The process of taking the Tabaco out, aeration, and reintroducing anaerobic fermentation is called 'turning' and will happen three times over the course of the life of a Perique barrel," Jeremy adds. This repeated procedure helps force the natural ammonia out of the leaf and reintroduces natural yeast to the Tabaco, continuing its fermentation process. Once the entire process is completed, the leaves are free of ammonia and the result is fermented black leaf with a distinctive flavour and aroma. [2]

[2] An excellent article can be found here: Blog, Perique