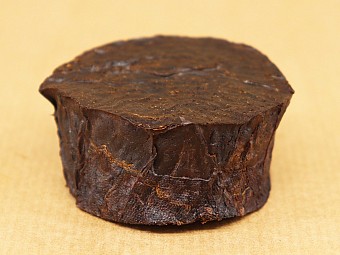 New fresh stock. Peruvian Mapacho Tabaco Masos section. Produced according to an old traditional method. Traditionally this Rustica variety of Tabaco is used for ceremonial pipes and for blowing healing during curing ceremonial rites. Mapacho is multiple times stronger than common Tabaco (Nicotiana Tabacum). They are fresh and juicy. They were vacuum-sealed when we received them, to keep them fresh and preserved during storage and transport. Origin: Iquitos, Peru. More information below in the description. 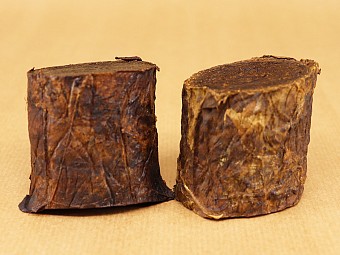 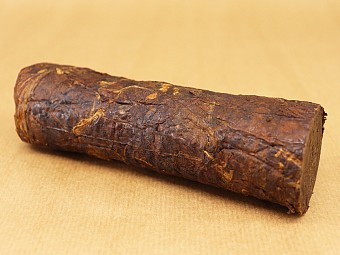 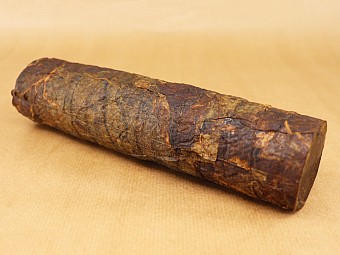 A Mapacho Maso is a fermented solid mass of Tabaco leaves, and consists of tightly wrapped and bundled Nicotiana Rustica leaf, produced in Peru. They are made according to an old traditional recipe and contains a solid but juicy jungle Tabaco. The indigenous Amazon people have used Mapacho products in traditional ceremonies in weather prediction, fishing ceremonies, and spiritual applications such as meditation and trance. Tabaco is used as a healing and purifying herb and also used as a smudging herb for energy cleansing in a very similar way to sage. In traditional spirituality, it is believed that evil spirits cannot reside where there is this sacred Tabaco.

You can read more about the use and history, and the significance of this Tabaco on the Mapacho Facebook page.

​In addition to Ayahuasca rituals that are combined with Tabaco snuffs, there are even shamans that specialised in Tabaco healing, called tobaqueros (Jauregui et al. 2011). When used in shamanic rituals, Tabaco is assumed to protect, cleanse and re-align energies, thereby bringing profound clarity and healing (Jauregui et al. 2011). Furthermore, South American shamans, commonly use Tabaco smoke to blow it over the person to be healed with the intention to bring their energies into equilibrium and clean out all negativity and anxiety (i.e. ‘sopladas’ – the healing energy of blowing) (Jauregui et al. 2011). Thus, Tabaco in the shamanistic culture has a potent function of cleansing, bringing clarity and focus, and for allowing strong visualisations.

Nicotiana Rustica is extremely potent, containing up to 20 times higher levels of nicotine than the usual Tabaco, Nicotiana Tabacum (Stanfill et al. 2010). Therefore, this shamanic tool is extremely powerful and can provide an intense journey of cleansing and energetic shift. Through this highly activating Tabaco, one might feel a strong aiming of the mind, and intense clarity and focus.

This massive form of Mapacho is made according to an old traditional recipe and contains a solid but juicy jungle Tabaco. They are fresh and humid. They were vacuum-sealed when we received them, to keep them fresh and preserved during storage and transport. Upon receiving you can keep it in the vacuum state for many months. When opened, unpack the section and store it in paper wrapping. When the outside becomes brittle over time you can simply spray the outside with distilled water, thereby the material will slowly absorb the water and the outside layer will become fresh again. Pack the humidified Tabaco in a plastic bag for a day or two, maximum. Then it needs to be wrapped in dry paper again.

Note: This can not be stored in a (non vacuum) plastic bag, as this may cause to form mould. Store it in paper instead, below room temperature.