The Nukini Tribe
The Nukini tribe (Fig. 1) can be found in the heart of Acre, spread out along the streams of Timbaúba, Meia Dúzia, República and Capanawa, which belongs to northern Brazil and lies in the heart of the Amazon. This region has two frontiers with Peru and Bolivia and is surrounded by a tropical forest with a high floristic density. There are a lot of plants that tribe members, especially the women, gather from the forest in order to make handcrafts and healing plants. Like the Yawanawa, their language belongs to the Pano linguistic family.

The Nukini population adds up to only about 750 people. This decrement in population of the Nukini tribe arose back in the beginnings of the 20th century, during the latex cycle. During that time, the Nukini made their first contacts with Brazilian and Peruvian non-indigenous people and were driven in harsh slavery and exploitation for harvesting latex from the rubber trees. After that cycle, the few members that managed to survive, were spread over the huge territory. In addition, some indigenous settlements were massacred by extractivists of caucho after the latex cycle. A huge part of the culture, including their language and other traditions, was lost or scattered due to these cruel incidents (Aguiar 2012). Almost the entire ethnic group disappeared and got challenged by severe epidemic outbreaks in the years afterwards.

Due to this decline in members, many Nukini people had to mingle with members from other ethnicities in order to survive. Exploitation and violence that started with the rubber industry, has turned into drug traffickers, loggers and hunters that still pose a threat to this tribe. Despite all these challenges that the Nukini people had to face, at the present time, the Nukini have a stable socio-economic situation and pursue economic activities as fishing and hunting, while there are also many nutritious plants, like mango, soursop, coconut, cashew, jackfruit, pineapple, lemon, Barbados cherry, guava, avocado, pupunha, cupuaçu and papaya that nourish the tribe.

Rapé from the Nukini tribe is full of feminine power and is often even composed by feminine tribe members. Many of their blends contain a flowery, fresh odor, providing thorough grounding and clarity. 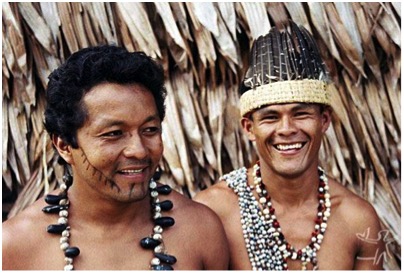 References:
de Aguiar MS (2012). Nukiní: the Language and the Self-Esteem of a People. Proceedings published: kellogg.nd.edu/STLILLA