Kuntanawa tribe
The Kuntanawa tribe, or as they call themselves the ‘Coconut people’, have always used plants to connect with the beings and the spirits of the forest, thereby they learned how to cure their tribe with their own traditional medicines, and until today they maintain their practices.
The tribe lives along the River Tejo in a reserve of the Acre region in Brazil. There are only about 400 tribe members left (Pantoja 2008), and they are still struggling to regain a demarcated territory, which the Brazilian Government keeps on delaying. The Kuntanawa people have always defended their spirituality as their principle of existence. 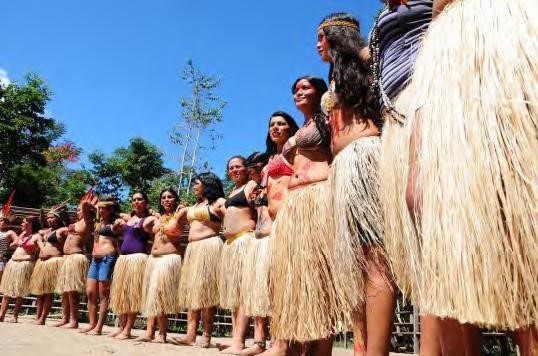 Like the Nukini tribe, the Kuntanawa were almost exterminated during the massacres of the latex cycle and the violent enslavement and assassinations in the years after. Only a single family that was working as mestizo rubber tappers was left to preserve and transmit the cultural heritage. It took the Kuntanawa until the beginnings of the 21st century to regain ethnic recognition. Therefore, all tribe members speak only Portuguese, as no-one still knows the indigenous Panoan language. In addition to the consequences of the latex circle, loggers and oil companies are intruding onto the Kuntanawa reserve; to gain more land, these companies are destroying indigenous settlements with dynamite, and they are polluting the drinking water with chemicals, which is killing many tribe members. There is a lack of governmental support and there are no specific laws to protect indigenous groups. Moreover, as the Kuntanawa do not have a political representative they cannot take part in governmental negotiations. Yet, great efforts are being made to connect the Kuntanawa with other Panoan tribes, like the Yawanawa and Kaxinawa, in order to re-learn the language, rituals, and traditions.

Ayahuasca the guide of lost traditions
To reconnect the tribe with their traditions, it was necessary to connect the Kuntanawa with their sacred plants, like Ayahuasca. After a journey of two of the remaining family members in 1989 to the Kaxinawa territory along the Jordan and Breu River, Ayahuasca rituals got quickly rediscovered and reintegrated into the Kuntanawa culture. During this journey, the Kuntanawa got in contact with revered shamans, and they also took part in Ayahuasca ceremonies. After the journey, they quickly resumed the cooking of Ayahuasca and its rituals. Similarly, they brought back indigenous elements, like clothing, bracelets, wristlets, and body paints.
Ayahuasca seems to be even the driving force in the cultural reconnection, self-consciousness and ethnic identification of the Kuntanawa. The Kuntanawa claim Ayahuasca to be their teacher and leader of unidentified dimensions, like their culture. Ayahuasca teaches them to ‘listen’ and opens their minds and their perception for the lost traditions and history, including music and chants, magical and botanical knowledge, painting and even their language. Moreover, during Ayahuasca ceremonies the Kuntanawa are able to experience and construct a new self-image that helps them to connect to their roots and to the membership of Kuntanawa.

Cultural Celebrations and Ceremonies
In 2010 the Kuntanawa and the other 12 Panoan language tribes organized a big ceremony the ‘Cultural Pano Festival’ to celebrate and strengthen their tribal heritage and culture. Even shamans from Greenland were invited. This was the first ceremony since 1911 where all the Pajés (shamans) and spiritual leaders of the 12 related but distinct Panoan tribes came together. Every tribe could share their experience and indigenous knowledge to help the Kuntanawa gain more self-identification and to support a pan-ethnic Pano alliance built on fraternity and exchange. Almost every night, Ayahuasca and other healing ceremonies were held, including chanting and snuffing Rapé. Moreover, a vivid interchange of problems and ideas was pushed forward. These efforts are in great need, considering that the Kuntanawa need to rebuild almost all aspects of their culture: their language, paintings, rituals, and even their Kuntanawa membership.
In the year 2007 the Kuntanawa received the Indigenous Cultures Award for the project of ‘cultural revitalization and recovery of the indigenous culture’ of the Kuntanawa - awarded by the Culture Ministry (Labate and 2014).

Rapé
The Rapé of the Kuntanawa has a very unique vibration. It has a strong spiritual connection that brings the attention inwards and calms the mind down, allowing the healing and understanding to enter from the spirit of the medicine.
Sometimes, they add plants with cosmologic powers, which bring luck, tranquility, and other benefits, like protection and blessing for people and hunters. The Kuntanawá say, Rapé helps them to gain strength, clarity, and power to have the right attitude and to take correct decisions. Interestingly, their Rapé stimulates the chest and the heart region more than the head. It is typically mild, burns less in the nose and in the brain, and many people consider it heart opening – as it contains ashes of the Tsunu tree (Platycyamus regnellii). In addition, their Rapé usually contains tabaco and a.o. Samauma, Nissural, Jarina, and Sanssara.

References
Labate BC, Cavnar C (2014). Ayahuasca Shamanism in the Amazon and Beyond. Oxford University Press