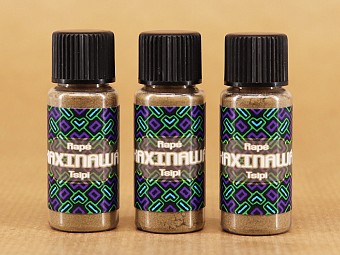 (Batch #0419) A rare Kaxinawa Rapé. Light brown in colour and it's aroma is embued with a sense of ascension and expansion. It is not sharp or harsh on the sinuses but for the discerning user it heightens ones senses and subdues the chatter of the mind while a greater appreciation for the sensory experience of the world around is felt. It is gentle with little body load, little eye watering, and no bad taste is experienced. Other than local Tabaco, Txunu ashes this Rapé is made with a herb locally called "Tsipi" or "Tipy". More information can be read below.

This Rare and vibrant Rapè from the Kaxinawa is light brown in colour and it's aroma is embued with a sense of ascension and expansion. This effect is not only found in the olefactory sense but crosses over into its effect upon use. It is not sharp or harsh on the sinuses but for the discerning user it heightens ones senses and subdues the chatter of the mind while a greater appreciation for the sensory experience of the world around is felt. A tingling and excitation in ones sense of beingness becomes apparent. It is gentle with little body load, little eye watering, and no bad taste is experienced. It's effects may be mild for those used to harder "grey style" Rapè's yet they are very much present. It would be especially appropriate for newcomers to Rapè.

Upon further getting to know this Rapé, it seems to aid in clearing the mind of the subtle background chatter present in our everyday routines. I a moderate dose, Tsipi can be overwhelming for those new to Rapé and time and space is needed to process the effects which will last for more than a few minutes. This blend has been ground to a very fine particle size and absorbs very well into the sinuses. It has its own particular colour and scent noticeably different from most other types of Rapè. Some sneezing is likely and the eyes tend to water almost immediately after application and the excess powder has a tendency to make its way downwards, meaning some physical purging is possible. After removal of the powder from the nose, the eyes seem to continue watering with infrequent sneezing and coughing. After the effects have resided the user is left in a calm and tranquil state ready to deal with the daily routines of everyday life. The background chatter is dissolved and one can focus on the here and now.

Unfortunately we have very little information on the exact ingredients of this Rapè other than local Tabaco, Txunu ashes and a herb locally called "Tsipi" or "Tipy" which seems to add this vibrant characteristic. As with some ingredients from the jungle only a common local name is known. We will update this description in more detail once we have ascertained more about the ingredients used but we welcome any feedback on it. This is another one of several varieties of Rapé and ashes that were collected for us. A friend who travels through Acre has revisited many tribes in search for more knowledge and exchange. Now a few years onwards we proudly present this collection of genuine ashes and Rapé's.

This unique item is one of its kind and comes from a new collaboration between cultures far apart. This batch of Rapé came as a somewhat coarse and gritty powder. We have reporocessed it to an extremely fine powder, 150 micron fineness. This is our standard because this provides the best Rapé experience.

Report from our favourite reporter:

"...I always need to point out that the experience is very personal, and 'in the moment'. I love how my intuition guides me to the Tobacco that's needed in the moment. 2 big spoons. A very penetrating and intense earthy taste. A smell that tastes like mud or forest soil. Very irritating in the nose, a lot of mucus along the mouth. The Rapé feels pretty thick, not only in substance but also in energy, it completely fills you, as it were. I had to cough a lot of the heavy powder, I got the idea I would still be smelling this blend for a long time after the session. The Rapé finds his way easily to the throat and not so much to the top of the head. The energy was good to maintain, but it should be noted  for novice users it can cause purification by vomiting. The experience is quite intense, but you do not fly in all directions, you stay well within the limits of your own body. A good Rapé to clean, especially along the nose. After the experience began to diminish, I felt very tired, as if the spirit showed me my fatigue, unconsciously present in that moment, I was forced to take rest, so I did, and went to sleep during the day. Thank you Maestro Tobacco for showing me where to go..."