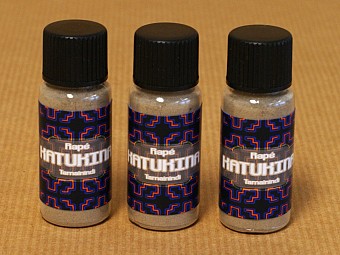 (Batch #9261) A rare and limitedly available treasure. A tribal Rapé from deep in the jungle of Acre. This Rapé contains the Tamainindi plant (also known as the Jungle Basil), Tobacco Corda and Moi, ashes of Pao d'Arco and Tsunu tree bark. The Tamainindi plant is used to bring peace and beauty into one's life. It provides a sharp heavy initial hit and forces an deep pulsing calmness in ones being. Some throat drip is present, phlegm production and eye watering are also apparent. Definately one for those that prefer a heavier and deeper flavour and effect. More information can be found below. 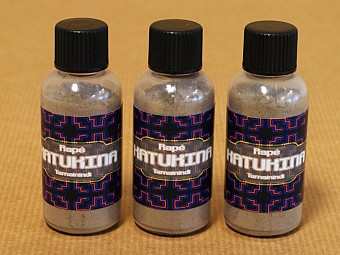 A rare and limitedly available treasure. A tribal Rapé from deep in the jungle of Acre.

This Rapé has a dark lava sand colour and is a very fine powder. It contains the Tamainindi plant (also known as the Jungle Basil), Tobacco Corda and Moi, ashes of a tree called Pao d'Arco and Tsunu tree bark. The Tamainindi plant is used to bring peace and beauty into one's life. It provides a sharp heavy initial hit and forces an deep pulsing calmness in ones being. Some throat drip is present, phlegm production and eye watering are also apparent. Definately one for those that prefer a heavier and deeper flavour and effect.

This Rapé was blended by a Pajé elder and his son. They live deep inside the jungle, in a village in the Tarauaca municipality. Rapé is part of their long ancestry and in general they tend to administer this medicine to themselves daily, usually in large amounts. Its said that the Katukina commune with the spirit of the Tobacco to discover cures for their patients who travel vast distances to receive direct healing from them. The money from this exchange was used to buy a new boat for the village, and to construct the medicine house for visitors, to facilitate healing ceremonies using Ayahuasca, Rapé and Kambo.

This is one of several varieties of Rapé and ashes that were collected for us. A friend who was traveling the entire South Americas in 2017 has visited many different tribes in search for knowledge and exchange of shamanic plants, ashes and Rapé snuffs. After negotiating the contributions and the purpose and goals of this exchange it resulted in a promising benefit for all involved. Over time we were presented with a unique collection of genuine ashes and Rapé's that were produced with the intention to be shared with a new and wide audience, worldwide. And to work towards a new future exchange of knowledge and medicines between cultures. This unique item is one of its kind and comes from a new collaboration between cultures far apart.

A wonderful and detailed article about the Katukina and our connection with them, can be found here.

"...For testing and reviewing this Rapé I started working in two sessions. I start with 2 spoons. The impact was a medium cut with a slight burning sensation in the throat. The energy changes were delayed and started to happen after a minute or so. Watering eyes and some mucus discharged. Little Rapé finds the way to my throat. When the spirit of this Rapé quietly makes its appearance in my whole body, I become heavier. Every muscle begins to relax and I sink deeper. It seems like I start to weighing more than before. I feel my bones very clearly on the floor. Through this relaxation and aggravation I also feel where there are still tensions and with my attention I can also bring these places into relaxation. A deep-rooted feeling. At this first impact I felt a pressure on the nose as if it was going to be closed rather than opening. This felt to me as the cleansing of my body. The tobacco carried off the heavy energy and I could let it go. After a few minutes I had the spirit of this Rapé under control. My feeling told me to take another spoon, after I had emptied my nose. Part two opened my nose completely, and I could breathe very open, giving a gentle vibration that kept me in the here and now for a long time. No thoughts arose, no emotions, only a deep grounding presence. My senses were sharpened and in particular the hearing. This Rapé works softly and subtle and it is clear that there are different directions possible according to my current state of being. At the first experience I had a heavy energy sitting, where the Rapé went to work carefully but after discarding this, I could receive the soft healing spirit completely in the second experience, to examine my body by being completely present, in the moment. A very nice blend that works softly and is easy to control, I love these gentle spirits in their complexity to what they want to teach us. For now my first experience with this Rapé was a very grounding one..."

Katukina or Catuquina, Katokina, Katukena, Katukino are generic terms that are attributed to five linguistically distinct but geographically proximate indigenous groups that live in southwestern Brazil at the border of the Amazonas and Acre. The Katukina are a tribe that is very connected to the usage of sacred plants. They consider themselves as the first tribe to receive the Kambo medicine straight from the frog. They still carry a vast knowledge about plants and the spirit of the world. Their Rapé is strong and deep, and it carries the wild and powerful spirit of the jungle.

More on the Katukina.