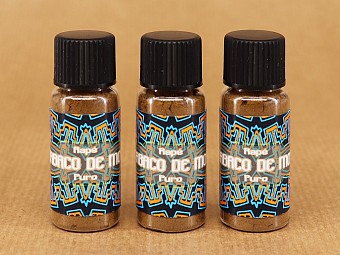 (New Batch #2943). Tabaco de Moy is one of the most beautiful of all Rustica types. The scent is just divine. Used alone or mixed into ashes this wonderful Moy powder heightens the senses and puts the user into a relaxed state of being. The powder is made from juicy fermented Tabaco de Moi masos from Brazil. First sun dried, deveined and finely ground, and then sieved multiple times to attain the finest dust of a dry and smooth powder. Perfect for using in personal preparations. More information can be found below. 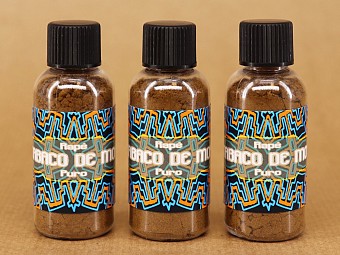 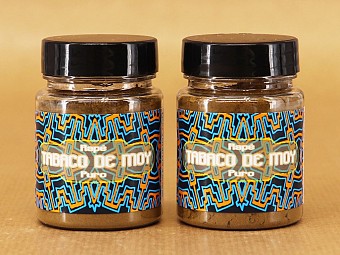 Tabaco de Moy is one of the most beautiful of all Rustica types available. The scent is just divine. Used alone or mixed into ashes this wonderful Moy heightens the senses and helps to put the user into a relaxed state of being. The aftertaste compared to other mapacho types is sweet and pleasant and being a very fine powder is easily removed from the passages after use.

The powder is made from juicy fermented Tabaco de Moi masos from Brazil. First sun dried, deveined and finely ground, and then sieved multiple times to attain the finest dust of a dry and smooth powder. This extremely finely powdered Tabaco is perfect for using in personal preparations. Mixed with Tsunu ashes it becomes a powerful but stable Rapé similar to other traditional types produced by the indigenous tribes of South America. Perfect for those wishing to explore the possibilities of blending their own varieties, or to add a rounded and grounding twist to your favourite grey Rapé.

All South American shamans have an intimate relationship with tobacco, and consider it a very sacred, wholesome plant that is deeply entrenched in their culture and rites. Tobacco consumed in high amounts has strong psychedelic and hallucinogenic effects, as it contains two alkaloids, harman and norharman, which are closely related to harmine and harmaline (Janiger et al. 1973). These two beta-carbolines inhibit monoamine oxidase (Herraiz et al. 2005), leading to antidepressive and uplifting effects (Farzin 2006).

​In addition to Ayahuasca rituals that are combined with tobacco snuffs, there are even shamans that specialized in tobacco healing, called tobaqueros (Jauregui et al. 2011). When used in shamanic rituals, tobacco is assumed to protect, cleans and re-align energies, thereby bringing profound clarity and healing (Jauregui et al. 2011). Furthermore, South American shamans, commonly use tobacco smoke to blow it over the person to be healed with the intention to bring their energies into equilibrium and clean out all negativity and anxiety (i.e. ‘sopladas’ – the healing energy of blowing) (Jauregui et al. 2011). Thus, tobacco in the shamanistic culture has a potent function of cleansing, bringing clarity and focus, and for allowing strong visualizations.

Juicy and fresh, are Brazilian "Tabaco de Moy" Masos, when they arrive. It is an ellaborate and patient process to produce an absolutely dehydrated fine (125 micron) powder.

The seeds of this special kind of tobacco have been passed down from father to son over generations and it belongs to the widely known species of Nicotiana Rustica. Yet there is no commonly known name attached to it, but it could be compared to Mapacho, for it looks very similar.

The "Tobaco de moi“ maso is longer than the Mapacho Maso and also it is much more dense in its structure. The leaves appear to be a bit darker as well as they have been put through the process of fermentation. It has been organically grown in the jungles of Brazil. Chemicals are not neccessary as tobacco itself is a great fertilizer and commonly used insecticide among the farmer communities.

After the harvest the largest veins of the leaves are removed, then dried and rolled up. The farmers then wrap the bunch of tobacco leaves up with a strip of natural latex or rubber and these bundles will then be left for half a year up to a whole year to mature and ferment. This way of storing and keeping the tobacco is very specific for the area of Acre in Brazil. In other regions the farmers use ropes to tighten the bundle of tobacco leaves together. This tobacco is traditionally used for Rapè, as in the ranges of Acre there is a lot of cultural background for the use of Rapè.