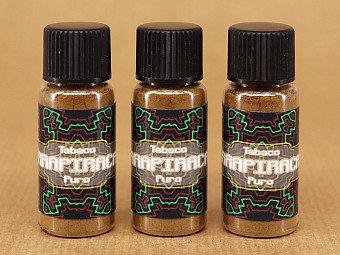 Arapiraca Tabaco is made from rope Tabaco, which is a Nicotiana Rustic strain. This is about 20 times stronger than our traditional Tabaco, Nicotiana Tabacum. This powder is made from fermented rope Tabaco. When the Tabaco is harvested it is first fermented and then turned into ropes and rolled up on rolls. After this process it sits on the rolls to mature. When we prepare the Tabaco for rapé it is dried in the sun, beaten and sieved. 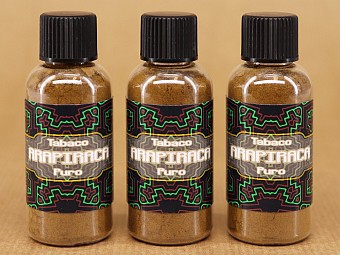 In the north east of Brazil the climate is very good for planting Tabaco, it is dry and sunny. Since the Europeans started to traffic Tabaco the northeast became the principal region for production. Arapiraca is a city in the state Alagoas and they are one of the main producers of Tabaco, mainly rope Tabaco or “Tabaco de Corda” as it is called in Portuguese, but also cigars. The process is quite different though; cigar Tabaco is dried and cut while the Corda is fermented.

When the Tabaco is harvested it is first fermented and then turned into ropes and rolled up on rolls. Each roll can weigh around eighty kilo. After this process it sits on the rolls to mature. The Tabaco can be used for smoking, chewing or in Rapé production. It is mostly smoked rolled in a corn leaf or smoked in pipes.

Arapiraca Tabaco is a Nicotiana Rustica strain. In the state Acre the only Tabaco grown nowadays is the natural Tabaco de Moy, which is a milder Tabaco that nowadays is used less to produce Rapé. A lot of Tabaco is brought from other states to the Amazon where the Rapé crafters buy it for their production. The only Rapé that is 100% made by the tribes is the Apurinã Awiry. Most Tabaco is grown organically since Tabaco itself is used in organic farming as a pesticide.

This powder is made from fermented Rope Tabaco. When the Tabaco is harvested it is first fermented and then turned into ropes and rolled up on rolls, each roll can weigh around eighty kilo. After this process it sits on the rolls to mature. When they prepare the Tabaco for Rapé it is dried in the sun, beaten and sieved.