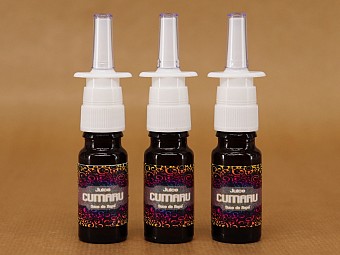 Restock expected in July. Suco de Rapè Cumaru is a liquid Rapé blend. Fresh Cumaru beans are used to add a sweet spicey note. The juice has a strong effect on focus and presence, it provides powerful grounding and stops all the chattering of the mind. Due to the addition of many different varieties of Rapè, this version has a spicy and flavourful twist to it. Advised is to not swallow the remains when it falls in the back of the throat. Bring the phleghm up and spit it out. More information below.

Suco de Rapé Clarity is a potent nasal spray. It is made by steeping a blend of 10 different varieties of Rapé in a hydro-alcoholic solution for many months. Aromas of the Mint family and Cacao aroma are added for an exquisite aromatic experience. Organic bio alcohol was used in the steeping and extraction phase to ensure stability of the infusion and to stop the natural fermentation process. Following the long steeping, the juice is separated by extensive filtering and then slow vacuum evaporation of the solution reduces the liquid into a juicy extract. The vacuum reduction involves no heat. The result is a high quality concentrated extract and so called "raw" product. Before bottling, a small percentage of bio alcohol was added to ensure a limitless shelf life.

Mapacho is one of the most traditional and most wholesome plants of the Amazon. It is used alone by shamans that specialized in tobacco (tabaqueros) or it is used in combination with other plants, like ayahuasca. Another traditional tobacco use is the use of singa, or tobacco liquid. Singa is often applied during initiations, crises, and rituals, where it can be snuffed, drunken, or spit over the body of a sick person with according chants. Moreover, singa has sedative or narcotic effects that help to induce a trance state, and in addition, to suck out evil spirits and illnesses in patients.