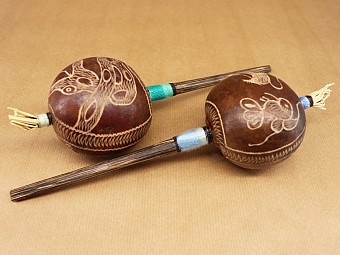 Amazon jungle rattle, also known as a maraca, from Peru. These hand held instruments are often used during Ayahuasca and healing sessions. As you can see on the pictures they depict various designs. Handmade and engraved with designs of animals and nature, meaning each one is totally unique. Crafted by local communities using a fair trade policy. Maracas are traditionally sold in pairs. These are sold singly. More information can be found below.

Measuring between 22 and 27 cm in total length and featuring a shaker head of approximately 6-8 cm.

Rattles similar to maracas have existed for millennia in Africa, the Pacific Islands, and the Americas. The Araucanian people, who live in what is now central Chile, may have been the first to use the word maraca to describe a gourd rattle around 500 BC. Some historians, though, attribute the word's origins to the Tupi people in pre-colonial Brazil. There are also ancient records of maracas in West Africa, where a Guinean legend describes a goddess who made a maraca out of a gourd and white pebbles. [1]. They mark the beat like drums do, and they are fairly simple to play. Most traditional maracas are made out of dried, hollow gourds or coconut shells, and they're filled with dry beans, seeds or pebbles. In some French-speaking parts of the world, maracas are called 'shac-shacs' [2]

The gourd rattle is described as the sound of Creation. The creation stories tell of the first sound, a shimmering sound, which went out in all directions; this was the sound of the Creator's thoughts. It is said that the seeds of the gourd rattle represent the voice of the Creator since they are the source of newly created life. The seeds within the rattle scatter the illusions of the conscious mind, planting seeds of a pure and clear mind.

In South America, the shaman's rattle is a most sacred instrument. The various parts of the rattle symbolise the structures of the world. The handle is the vertical axis that ascends into the Celestial Realm. The Upper World is represented by the rattle's head-gourd, which contains the spirits. The joining of the head of the rattle to the handle symbolises the joining of masculine and feminine elements in the universe.[4]

The repetitive sound of the rattle, like that of the drum, helps induce trance states. It is often used in ceremony including Ayahuasca and other healing ceremonies. John Fire Lame Deer speaks about the tiny stones that are used in the rattle in his book Sioux Medicine Man,"We Medicine men go out to look for anthills and get these tiny rocks. They are sacred. We put 405 of them into our gourds and rattles - they represent the 405 trees which grow in our land." Grandfather John Fire later says in his book that the 405 tiny stones in the rattle represent the number of available spirit helpers available and ready to assist in a healing or ceremony.[3]

Rattle is the oldest musical instrument for soul retrieval work, and humankind's imitation of rain according to Angeles Arrien in her book, The Four Fold Way "It is a cleansing and purification instrument used to remedy soul loss, depression, disheartenment, and dispiritedness. She goes on to say that "In practice most Shamans use the rattle for cleansing and purifying, and then they use the rattles sound to call parts of the soul that have been lost in the past, in a particular place or in a relationship" [3]