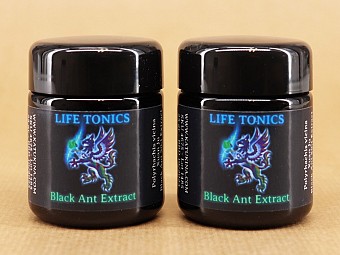 Black Ants (Polyrhachis vicina Roger) are a traditional edible insect species in China renowned for their health promoting qualities. Ants are rich in protein, amino acids and nutrients such as Zinc. It is considered a superb adaptogenic substance in the same categories as Ginseng, Siberian Ginseng, Rhodiola, Schizandra, Cordyceps, Reisi, and Gynostemma, it is the adaptogenic prize of Chinese tonic Herbalism. Life Tonics Black Ant extract (100:1) is the most concentrated Black Ant extract we are aware of and we are proud to offer it.

Edible black ant (Polyrhachis vicina Roger) is a traditional edible insect species in China renowned for its health promoting qualities. It has been used as a functional ingredient in various tonics or health foods for hundreds of years. Ants are rich in nutrients such as Zinc (Cai et al., 1993; Li et al., 1995), and have several healthcare functions, e.g. regulating immune system, relaxing fatigue and anti-aging (Tian and Zhang, 2002)[2].

The extract of the ant genus Polyrhachis contains over fifty nutritional elements, including 26 kinds of amino acids of which eight are essential to the human body. The dry ant contains 30~70% protein, and also contains vitamins B1, B2, B12 and trace elements such as Ca, Cu, Fe, Mg, Mn, Mo,P, Se, Zn. Pharmacological tests and clinical trials have showed that certain components of the ant are active in combating arthritis, rheumatism, liver ailments, asthma, and even cancer. Recent biological studies have indicated that ant extract is an immunopotentiator of broad-spectrum,  which increased the amount of RNA and DNA as well as the number of immune cells[1].

Black Ant is also considered a superb adaptogenic substance in the same categories as Ginseng, Siberian Ginseng, Rhodiola, Schizandra, Cordyceps, Reisi, and Gynostemma, it is the adaptogenic prize of Chinese tonic Herbalism. Ant has been historically considered a superior tonic in the highest degree. Health food prepared from Black Ant extract has been reported to be helpful for supplementing blood, building up physical strength and vital energy, increasing sexual desire, cleaning the lungs and liver, and prolonging life in general[1].

The extraordinary 1:100 strength extract is the most potent and therefore also the most expensive quality.

Our new range of 'Life Tonics' is a collection of extracts, tinctures and substances of some of the most powerful and life enhancing herbs and compounds currently available. Designed to improve both physical and mental energy with potent life enhancing nutrients. The herbs are wild harvested in an eco friendly manner during the right seasons and from their indigenous locations. The herbs are extracted during the peak potency of the plants strength and growth cycle.

Ants have been consumed as a health food for hundreds of  years. In ancient China, edible ants were called Xuanju and were widely used in Chinese medicines. During Zhou dynasty (11th century BC-256 BC), larvae of the ants were tribute food to be eaten by the emperors and the nobles (Li, 1999; Tang et al.,1995). Edible ants are still used as an ordinary food in some ethnic districts of Yunang, Guangxi and Guizhou in China (Wu, 1994). People in some ethnic districts of Mexico and Africa also have the habit of eating edible ants (Elorduy et al., 1997; DeFoliart, 1999)[2].

In his classic Compendium of Materia Medica, LiShi-Cheng (1518-1593), the greatest Chinese herbalist  and practitioner, introduced varieties of ants, properties and their living environment, and described how the ancient practice of eating ants eggs and serving ants to tribal chiefs and noble lords. Li said that the ant is highly sensitive to the weather and able to forecast a rainy day[1].

Chinese black ant, Polyrhachis vicina Roger belongs to Formicidae, Hymenoptera, Insecta in zootaxy, and is widely distributed in subtropical southeast China, India, Malaysia, Srilanka and Bangladesh (Tang et al., 1995). It has been used as a nutritional ingredient and processed into various tonics or health foods. Its products available in Chinese market include powder products, drinks such as wines and capsules (Zhon, 1996; Shen and Ren, 1999)[2].

Yih-Dih Cheng et al have found the extract of the ant genus Polyrhachis contains over fifty nutritional elements, including 26 kinds of amino acids of which eight are essential to the human body. The dry ant contains 30~70% protein, and also contains vitamins B1, B2, B12 and trace elements such as Ca, Cu, Fe, Mg, Mn, Mo, P, Se, Zn[1].

At first use, open the lid, remove the white seal and discard it. After use, close the lid tightly. Usage: Use the measuring scoop to extract a dosage from the container and close it immediately, as the extracts are hygroscopic and absorb humidity from the air.

Storage: Keep in a cool and dry place. Opened packages must be kept cold. (The shelf life is approximately 1 year)

How to take: 500-1000 mg a day. Using the 0,5 ml measuring spoon provided, one spoon will equal approximately 500 mg. It is recommended to use Black ant extract on an empty stomach in the morning and before sleeping by slowly sucking and waiting at least half hour before drinking liquids so as to not dilute your precious ant extract.

Recommended is to use the Life Tonics extracts daily in measured dosages (500-1000 mg) daily, rather than high doses infrequently.